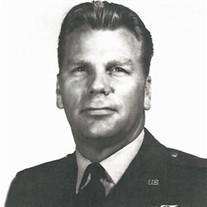 Robert Howard Foster was born 4 November 1920 in Monroe, Georgia to Robert Claude Foster and Bessie Maude Peters. He was the oldest of five sons and three daughters. The Fosters were hard working common folk. They relied on farming and growing much of what they needed. On the farm he picked cotton, plowed corn fields, harvested fruit, cut fire wood, harvested pigs, and did all of the chores of farm life. He attended Monroe High School where he was on the football team, as evidenced by several false teeth. He graduated from high school in 1937 and went to the University of Georgia. At the University he was on the football team and participated in the horse cavalry ROTC program. In 1939 he enlisted in the Army Air Corps. When WWII broke out in 1941 Robert was sent to Salt Lake City to train in P-39 fighters. It was there that he met Delora Larsen, the love of his life. His unit was transferred to Louisiana to prepare to be sent to North Africa. Delora followed him there, and, on 28 February 1942, they were married at an LDS Gold and Green Ball. Their honeymoon didn’t last long. Robert was transferred to England in July on 1942 and would spend the next 2 ½ years there in support of bombing and fighter missions during the war. After the war he was transferred to the air field at Wendover, Utah. In 1950 he, Delora and two boys (Steven and Clyde) were transferred to Fairchild Air Force Base in Washington. During the Korean War, Robert was sent twice to Korea where he participated in bombing the North Koreans and Chinese along the DMZ. While in Spokane he joined the LDS Church and He and Delora and two boys were sealed in the Manti Temple in October 1951. In 1953 a third son (Sam) was born to the family. In 1955 he was transferred to Hurlburt Air Force Base in Fort Walton Beach, Florida. In February 1956 a fourth son (Dan) was born to the family, and Robert and family was transferred to Cannon Air Force Base in Clovis, New Mexico. In 1958 Robert was transferred to Hunter Air Force Base in Savannah, Georgia. The family was active in the LDS Church and fond memories were made traveling numerous miles on his church assignments. In 1960 instead of being sent to Toole, Greenland he put in for retirement. Robert moved the family to Athens, Georgia where he enrolled at the University of Georgia. After studying Geography for four years he graduated with a B.S. degree in 1964. Afterwards, the family moved to Provo, Utah and he enrolled at Brigham Young University. In 1966 he received a Master’s Degree in Geography and in 1968 he received a Doctor of Philosophy Degree in Botany. Upon Graduation Robert was hired as an Assistant Professor at Western Kentucky University in Bowling Green, Kentucky. The family moved to Kentucky and Robert taught at the university for eight years. In 1970 he became the LDS Patriarch for the newly organized Nashville, Tennessee Stake. In 1976 he retired from the State of Kentucky and moved permanently to Provo, Utah. For the next 35 years he and Delora spent fun filled days doing environmental and vegetation studies for Brigham Young University and the National Park Service all over the Western United States. He also taught on the faculties at Brigham Young University and Utah Valley University. In 2011 he fell and broke a hip, thus ending a marvelous capability to travel and enjoy the great American out-of-doors. He died on March 20 due to complications with his heart. Robert loved his membership in the LDS Church. Over the span of his life in the mission field, he and Delora were responsible for the building of eight new LDS chapels in areas where none had previously existed. He served as a Branch President, Bishop, in various bishoprics, various District Presidencies, on numerous Stake High Councils, and as a Stake Patriarch. Robert is survived by two sons Steven (Peggy) and Dan (Trena), a daughter-in-law (Maria Foster) one sister Sara Dial, two sisters-in-law, 29 grandchildren, and 53 great grandchildren. Funeral services will be held at 11:00 a.m., Tuesday, April 5, 2016 at the North Park Stake Center, 1066 West 200 North, Provo, Utah. Friends may call at the Berg Mortuary of Provo, 185 East Center Street, Monday from 6-8:00 p.m. and at the church Tuesday from 9:30-10:30 a.m. prior to services. Interment, Mt. Pleasant City Cemetery, Mt. Pleasant, Utah. Condolences may be expressed to the family at www.bergmortuary.com. In lieu of flowers please contribute to your local ward missionary fund.

Robert Howard Foster was born 4 November 1920 in Monroe, Georgia to Robert Claude Foster and Bessie Maude Peters. He was the oldest of five sons and three daughters. The Fosters were hard working common folk. They relied on farming and growing... View Obituary & Service Information

The family of Robert Howard Foster created this Life Tributes page to make it easy to share your memories.