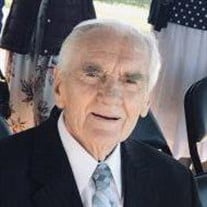 Robert J. “Bob” Mower returned to his Heavenly Father on May 11, 2019. He was born May 4, 1929 in Provo, Utah to Edgar J. and Luella Catherine Mower. Bob grew up in Provo and graduated in 1947 from Provo High School. From there he went on to BYU where he sang tenor in the Madrigal Choir. During this period of time he was serving in the National Guard. The Korean War had started and his unit was called out to serve overseas. He was trained as staff sergeant in communications repairing radios from 1950-1952. He was a proud veteran and loved his country. Bob met his wife Orlinda Wright when he returned to Provo after serving in Korea. They were married July 7, 1953 in the Manti Temple. Bob then returned back to BYU and received his Bachelor’s degree in business administration in 1955. He also holds a Master’s degree from the University of Washington with an emphasis in direct bank leasing. His thesis was used for improved operating procedures at the Bank of America where he worked at the time. Bob was a member of The Church of Jesus Christ of Latter-day Saints. His greatest love within the church was the missionary program. Bob served as ward missionary, Seventy’s president, High Councilman and temple worker. He was also active in the scouting program among other callings. His desire to serve a mission was achieved when he and Orlinda were called to serve as senior missionaries in Nauvoo, Illinois. Among other duties, they proudly gave tours of the Browning Home and taught the gospel to those interested. They loved their time there and considered their mission a highlight of their lives. Bob was a man of many hobbies and interests. He loved his antique cars, especially his 1933 Auburn which he fully restored. He enjoyed driving it in the July 4th and 24th parades. His Auburn won many ribbons and awards at classic car shows. It was also the lead car in the 50 year anniversary celebration of the Golden Gate Bridge in San Francisco, California. He inspired many of his friends to restore classic cars. Bob and Orlinda loved to dance and while living in the San Francisco bay area joined the “Debonairs” a dancing club, which they greatly enjoyed. Bob also enjoyed several years of singing with the Southern Utah Heritage Choir in St. George, Utah. Bob and Orlinda were married for 65 years. They traveled the world together and had a goal early on to visit every temple. However at the time of their marriage and goal setting there were only 12 temples. To date they have been through 60 temples worldwide. Our dad looked forward to his 90th birthday and surpassed it by exactly 1 week. He spoke that day of his wonderful family and how much he loved them. He made special reference to “his boys” — his 3 sons-in-laws whom he loved very much. Bob is preceded in death by his parents and two sisters, June Chipman and Joyce Kelly. He leaves behind his sweetheart Orlinda, 3 daughters, Susan Nelson (David), Nancy Leavitt (Noel), Stephanie Van Dusen (Stephen), 14 grandchildren and 29 great grandchildren. Funeral services will be held on Saturday, May 18, 2019 at 11:00 AM at the Berg Drawing Room Chapel, 185 East Center Street, Provo, Utah. Viewing will precede the funeral beginning at 9:30-10:45 AM. Interment will take place following the funeral in the Veteran’s section of the Provo City Cemetery. Condolences may be sent to the family at www.bergmortuary.com. In lieu of flowers, please donate to The Church of Jesus Christ of Latter-day Saints Missionary Fund.

The family of Robert J. "Bob" Mower created this Life Tributes page to make it easy to share your memories.

Robert J. “Bob” Mower returned to his Heavenly Father on May...

Send flowers to the Mower family.