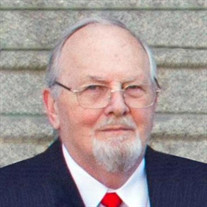 Robert LeRoy McFadden, beloved husband, father, grandfather, and great-grandfather returned to his Heavenly Father on September 5, 2021. He was born March 10, 1935 in Irwin, Pennsylvania, the youngest child of Homer Alfred McFadden and Emily Ann Dolensky. Robert married Noreen Scott on October 26, 1957 in Somerset, Pennsylvania. They were married 63 years at the time of her death. Together they raised three sons in western Pennsylvania. Robert was a graduate of Turtle Creek High School, class of 1953, and was proud to be a United States Army veteran. He served his community as Assistant Chief of the volunteer fire department, as an auxiliary police officer, and as president of his homeowner’s association. Robert was baptized a member of The Church of Jesus Christ of Latter-day Saints on August 14, 1976. His marriage was later solemnized in the Washington DC Temple. Through the sealing power of God, he will be reunited for eternity with his wife, sons, and all of their posterity. Robert served in many church assignments including youth advisor, scout leader, high priest group leader, and counselor in the bishopric. He was a faithful home teacher and served a 2-year social services mission with his wife. Robert was a machinist by trade, starting as a tool and die maker and later training to be a nuclear machinist, where he worked on parts for nuclear reactors and submarines. He was later a machine shop foreman for the Pennsylvania Department of Corrections. He retired and moved to Utah in 1997. Robert had numerous hobbies include reading, crossword puzzles, camping, hunting, fishing, metal detecting, gardening, making jewelry, and coin collecting. His pride and joy, though, was his family. They were the center of his life and brought him great joy. He loved being a father and grandfather. He attended every special family event he could, including birthday parties, baptisms, priesthood ordinations, temple ceremonies, graduations, weddings, and baby blessings. Robert was preceded in death by his beloved wife, Noreen; his parents; his brother, Homer and his sister, Emily. He is survived by his sons, Robert (Lisa) Jr, Jeffrey (Michele), and Scott (Janeen), as well as 11 grandchildren and 18 great-grandchildren. A public viewing will be held on Thursday, September 9, 2021 from 12:30-1:45 p.m. at Berg Drawing Room Chapel, 185 East Center Street, Provo, Utah. A service will follow immediately afterwards at 2:00 p.m. He will be laid to rest in American Fork Cemetery. Condolences may be expressed, and a video recording of the service may be viewed on the Berg Mortuary website at https://www.bergmortuary.com/obituaries/Robert-Mcfadden-3/.

The family of Robert LeRoy McFadden created this Life Tributes page to make it easy to share your memories.

Send flowers to the McFadden family.