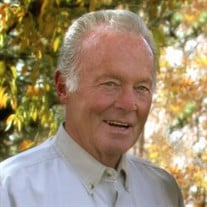 Robert Welton Mitchell (Provo), 81, passed away peacefully on January 15, 2020 in a care facility in Santaquin, UT after tenaciously fighting Parkinson’s Disease for 19 years. He was born May 27, 1938 to Belle and Welton Collins Mitchell. Bob married Norma Dee Hedquist on September 2, 1959 in Provo, UT. Bob and Norma were later sealed in the St. George Temple of The Church of Jesus Christ of Latter-day Saints on November 16, 1974. Norma was his eternal sweetheart and devoted caregiver. Bob was born in Provo, UT and attended Provo High School. He later graduated from Utah State University with a Bachelor of Science Degree in Forestry and Range. He spent 25 years working for the Bureau of Land Management. After retiring from the B.L.M. he bought a dump truck and fulfilled his dream of running Mitchell Trucking Co. The greatest joy in Bob’s life was spending time in the outdoors with his family. He loved hunting, fishing, driving ATV’s, boating in Lake Powell, and camping. Bob was a member of The Church of Jesus Christ of Latter-day Saints. He exemplified his love of service by fulfilling many different callings from Cub Scout Leader to counselor in the BYU 46th Ward Bishopric. Bob is survived by his wife Norma, sister Colleen Bement, and brother Clark Mitchell. He is also survived by his four sons; Scott (Necole), Ron, Dan (Lori), and Steve (Ellery). He has 13 grandchildren and nine great grandchildren. He was preceded in death by his parents Welton and Belle, as well as his brother Dave. Funeral services will be held at 11:00 a.m., Tuesday, January 21, 2020 at the Berg Drawing Room Chapel, 185 East Center Street, Provo, Utah. Friends may visit with the family at the mortuary, Monday, January 20 from 6-8:00 p.m. and Tuesday from 10-10:50 a.m. prior to services. The burial will take place at the Provo City Cemetery following the conclusion of the funeral service. Condolences may be expressed to the family at www.bergmortuary.com. Bob’s family expresses heartfelt thanks to the healthcare team at Seasons of Santaquin for providing love and care for him during the final months of his life. In lieu of flowers, please donate to your local animal shelter or a charity of your choice.

Robert Welton Mitchell (Provo), 81, passed away peacefully on January 15, 2020 in a care facility in Santaquin, UT after tenaciously fighting Parkinson&#8217;s Disease for 19 years. He was born May 27, 1938 to Belle and Welton Collins Mitchell.... View Obituary & Service Information

The family of Robert Welton Mitchell created this Life Tributes page to make it easy to share your memories.