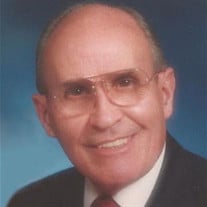 Dr. Robert W. Petty passed away April 18, 2015 at the Central Utah Veteran’s Home in Payson, Utah. He was born April 12, 1924 in Chicago, Illinois to Dr. Russell B. and Josephine Volker Petty. His young, gentle mother, Josephine died when he was only 12 years old. Later he was devoted to his second mother, Lucile O. Benson Petty. Robert was the oldest of eight children and strived to watch over them and to be a good example. On July 10, 1946 he was sealed in marriage to his sweetheart, Medalou Winter who passed away Sept. 21, 2011. He felt that caring for her was his greatest responsibility. Although his abilities had diminished, his only concern was to be here until her last day. He never stopped worrying for her and asking about her. Robert loved his Savior, Jesus Christ and served Him faithfully for many years through his work as a member of The Church of Jesus Christ of Latter-day Saints and his work as a medical doctor. As a young man he served in the Navy and received the World War II Victory Medal and the Korean Service Medal. In his professional life, he was an ophthalmologist with a practice in Provo. He loved the delicacy of his work and the precision it demanded, but he loved his patients more. He graciously received everything from garden vegetables to art work as thanks and payment. In the last years that he practiced medicine, he and Medalou lived in Saudi Arabia where he worked in the King Faisal Research and Specialist Hospital. There he respectfully treated everyone from the King to the poorest desert dwellers. Throughout his life, he was happy to serve in any church calling. Later, he and his eternal companion served temple missions fulfilling his life-long desire. Dr. Bob, as he was called in the last years, was always a gentleman and was concerned for others. Even in the last months, as his mind was clouded, he always offered his help and thanked all around him for every small kindness. He was a loving, considerate man who touched our lives for good. He was reunited with his wife, Medalou; infant daughter, Kathleen; parents; sister, Ruth Wright and an infant brother, Guy. He will be remembered by his children: James (Mary) Petty, Cynthia (Tom) Barkume, Douglas (Heidi) Petty, Janice (Steve) Bagley and Deborah (Brad) Nielsen; siblings: Elma Ray, Carolyn Strong, Jo Anne (Ray) Smith, Louise (Bob) Crowley, Richard (Joan) Petty and Lorraine (Jim) Pallo; 18 grandchildren; 34 great-grandchildren and many others. His family is grateful for the tender care he was given by Bristol Hospice and the Veteran’s Home and gives a special thanks to the veterans and staff for the respectful farewell. Funeral services will be held at 11:00 a.m., Saturday, April 25, 2015 at the Berg Drawing Room Chapel, 185 East Center Street, Provo. Friends may call at the mortuary, Friday from 6-8:00 p.m. and Saturday from 9:45-10:45 a.m. prior to services. Interment will be at East Lawn Memorial Hills Cemetery. Condolences may be sent online at www.bergmortuary.com.

The family of Robert W. Petty created this Life Tributes page to make it easy to share your memories.

Send flowers to the Petty family.