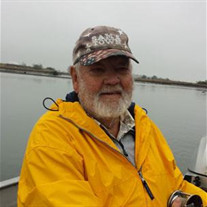 Robert G Prestwich passed away peacefully May 2, 2017 in the presence of his loving Daughters in Sandy, Utah. He was born June 12, 1929 in Orem, Utah to Horace E. Prestwich and Zipporah Varley Prestwich. He Married Lenora Clara Hirst June 6, 1947, together they raised 5 children. He had many skills and hobby's including hunting, the ability to build anything from houses to bedazzled bowling balls. He was an extraordinary fisherman and had a passion for writing poetry which was deep felt or kept you laughing until the end. He mostly loved being with his friends and family including his brothers, nephews and nieces. He had many fond memories and many great stories to tell. He mastered several trades before landing his career job for the Mountain Bell Telephone Company in 1949. Where made lifelong friends and enjoyed early retirement, March 18, 1980. After retirement, he did contract work that sent him on adventures in Colorado, Kansas, and Tillamook Oregon where he fell in love with salmon fishing. He enjoyed the next 30 years vacationing there with his wife Lenora, family and friends and catching the big ones. He spent winters making friends and winning in sunny Las Vegas, Nevada. Robert is survived by his three daughters, Jackie Peterson of Sandy, Utah, Sherrie (Scott) Jones residing in Stuart, Florida and Rose (Terry) Bakken of Provo, Utah. Sisters, Louise Spendlove of Santa Paula, California, Shirlene (Ray) Martineau of Salt Lake City, Utah, Gloria Rodda of Gig Harbor, Washington. He was blessed with a large family and adored his 17 grandchildren, 25 great-grandchildren, 3 great-great-grandchildren and special friend Kathy Shively. He was preceded in death by his parents, his wife Lenora, sons Glade and Wayne, 6 brothers and 2 sisters. A life well lived and on his terms, he will be greatly missed. We Love you Dad and hope you land the big one. Funeral services will be held at 11:00 a.m., Tuesday, May 9, 2017 at the Berg Drawing Room Chapel, 185 East Center Street, Provo, Utah. Friends may call from 9-10:50 a.m. prior to services. Interment, Provo City Cemetery. Condolences may be expressed at www.bergmortuary.com.

Robert G Prestwich passed away peacefully May 2, 2017 in the presence of his loving Daughters in Sandy, Utah. He was born June 12, 1929 in Orem, Utah to Horace E. Prestwich and Zipporah Varley Prestwich. He Married Lenora Clara Hirst June 6,... View Obituary & Service Information

The family of Robert G Prestwich created this Life Tributes page to make it easy to share your memories.

Send flowers to the Prestwich family.