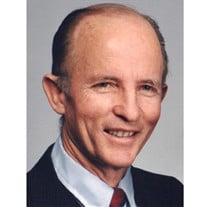 Dr. Robert M Rupper passed away on January 10, 2020 at the home of Ken and Nancy Rupper in Mesa, AZ. He was 90 years old. He was born on November 18, 1929 in Provo, Utah to Stella McEwan Rupper and Heber Samuel Rupper. He had four brothers: John, Warren, William and Michael and a sister Virginia. Robert grew up in Provo. He graduated from Provo High School where he was Captain of the tennis team. He worked at the Union Pacific Railroad while attending BYU. After three years at BYU he was accepted to Georgetown Dental School in Washington DC. He worked his way through dental school as a US Capital Police Officer guarding the Senate Office building and other Federal government buildings. After graduation he served in the Air Force in Sacramento, California. There he met Aleta Pryde and they were soon married in the Salt Lake Temple. Upon completion of his military service, he and Aleta returned to Provo where he opened his dental practice. Robert was a member of The Church of Jesus Christ of Latter-day Saints. He and Aleta served two missions. Robert was an avid fisherman and hunter. He loved to ski and oil paint. He was good at anything requiring him to work with his hands; be it building a boat, two motor homes or welding. He enjoyed travel, photography and planting gardens and fruit trees. He loved to help out in the neighborhood. Most of all he enjoyed telling jokes. He is survived by his eight children: Ron (Lorraine), Ken (Nancy), Janet (David) Gardner, Joyce (Gary) Johnson, Todd (Sussy), Cinda (Mark) Parratt, Greg (Angie), Debbie (Hank) Baskin; brother Michael and 19 grandchildren. The family would like to thank Ken and Nancy Rupper for taking wonderful care of him for the last 2 years. We also appreciate Alisha Gardner, Greg and Joy Loosli, and members of the Edgemont 3rd Ward for making sure he was fed and watching out for him after Aleta passed away in 2011. Funeral services will be held at 11:00 a.m., Saturday, January 18, 2020 at the Edgemont 3rd Ward Chapel, 2900 Timpview Drive, Provo, Utah. Friends may visit with the family at the Berg Mortuary of Provo, 185 E. Center Street, Friday, January 17 from 6-8:00 p.m. and at the church Saturday from 10-10:45 a.m. prior to services. Interment will be at the Provo City Cemetery. Condolences may be expressed at www.bergmortuary.com.

Dr. Robert M Rupper passed away on January 10, 2020 at the home of Ken and Nancy Rupper in Mesa, AZ. He was 90 years old. He was born on November 18, 1929 in Provo, Utah to Stella McEwan Rupper and Heber Samuel Rupper. He had four brothers:... View Obituary & Service Information

The family of Dr. Robert McEwan Rupper created this Life Tributes page to make it easy to share your memories.

Send flowers to the Rupper family.