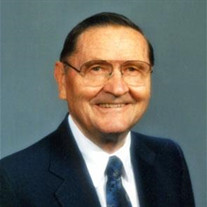 Robert Junius Smith, 95, passed away 4 March 2016 in Provo, Utah. He was born to Samuel Francis and Lulu Jane Hatch Smith on 25 December 1920 in Snowflake, Arizona. He attended Snowflake Public School and Snowflake Union High School. He had degrees from Brigham Young University, Northwestern University, and Indiana University. He filled an LDS mission in the Southern States Mission, where he met Sister Lola Nielson. They were married on 5 November 1945 in the Salt Lake Temple and were blessed with 8 children. Besides Provo, which has been home for most of their married life, they lived in Chicago, Illinois; Bloomington, Indiana; Plainfield, New Jersey; Raleigh, North Carolina; and Jerusalem, Israel. They resided in Israel for 3½ years while Robert was comptroller for the construction of the BYU Jerusalem Center. His military service was in the US Naval Reserve (1944–46), where he spent time in San Diego, Chicago, the Washington DC area, Boston, and aboard the USS Whetstone (LSD-27), achieving the rank of ETM-2/C (electronics technician mate). He served in many Church positions, including bishop of two wards, counselor to three stake presidents, stake president, regional welfare agent, and Provo Temple president. Together with his wife, he served an office mission in the North Carolina Raleigh Mission and also a church service mission at the Missionary Training Center in Provo, Utah. He served for many years as an ordinance worker and sealer in the Provo Temple. He taught accounting at Brigham Young University for 18 years and did part-time public accounting work, having received certification as a certified public accountant (CPA). In the May 1949 CPA examination, he received the highest scores in the nation and was given the Elijah Watt Sells Gold Medal Award. His teaching was followed by 18 years in administrative assignments at BYU, where he retired as Financial Vice President. Survivors include children Lynette and Greg Lyman, Pleasant Grove, Utah; Lynn and Donna Smith, Orem, Utah; Shirley and Stephen Ricks, Provo, Utah; LaRae Blake, Pleasant Grove, Utah; Jeanine and Stan Denton, St. Peters, Missouri; Larry and Holly Smith, Ephraim, Utah; and Sheldon and Sarah Smith, Provo, Utah; 40 grandchildren, and 72 great-grandchildren. He was preceded in death by his wife, Lola Nielson Smith; parents, Samuel and Lulu Smith; 12 siblings; daughter Junola Bush; and two sons-in-law, Ben Blake and Chuck Bush. The family wishes to thank nurses and caregivers from Horizon Hospice and grandsons Timothy and Ryan Smith for their kind and loving care. Funeral services will be held Saturday, 12 March, at 11:00 am at the Sharon East Stake Center, 2400 North 1060 East, Provo, Utah. Family and friends may visit on Friday, 11 March, from 6:00 to 8:00 pm at the Berg Mortuary, 185 E Center St, Provo, Utah, and on Saturday, 12 March, from 9:30 to 10:45 am at the Sharon East Stake Center, prior to the service. Interment will be at East Lawn Memorial Hills. In lieu of flowers, donations may be made to the Robert J. and Lola N. Smith Jerusalem Scholarship Endowment Fund at BYU. Condolences may be expressed to the family at www.bergmortuary.com.

The family of Robert Junius Smith created this Life Tributes page to make it easy to share your memories.