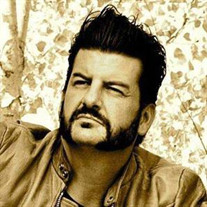 Rod Howard Ash was born in Provo, Utah on September 12, 1968 to Dean and Beverly Peery Ash. He unexpectedly passed away on April 19, 2017 from heart failure. He attended Maeser School, Farrer Junior High and graduated from Timpview High School in 1986. He served an LDS Mission to the Eugene and Portland, Oregon area. Anyone who knew Rod, knew that he had a zest for life. Rod will always be remembered fondly for his vitality, charismatic smile, and positivity. He welcomed everyone and made you feel like you were his best friend. A gifted, creative, and talented artist, he shared his talent with everyone. His eclectic fashion style set him apart; he was known for his hair and collection of creeper shoes. Rod's greatest achievement and joys were his children Frani and Ethan, and his grandson Quinn. He is survived by his children--Francis and Ethan--and his grandson Quinn, as well as his parents Dean and Beverly Peery Ash of Provo, Utah, and his sister Stacy (Gordon) Strong of Springville, Utah. He is preceded in death by his grandparents Howard and Deane Peery, and Arnold and Ireta Ash. Funeral services will be held at 11:00 a.m., Monday, April 24, 2017 at the Provo 1st Ward Chapel, 195 South 100 East, Provo, Utah. Friends may call at the Berg Mortuary of Provo, 185 East Center Street, Sunday, April 23, from 6-8:00 p.m. and at the church Monday, from 9:30-10:45 a.m. prior to services. Interment, Provo City Cemetery. Condolences may be expressed at www.bergmortuary.com. In lieu of flowers, a trust fund has been created for his children and grandson via gofundme.com.

The family of Rod Howard Ash created this Life Tributes page to make it easy to share your memories.

Send flowers to the Ash family.