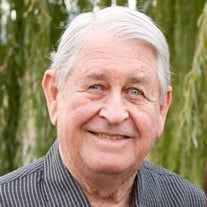 Rodney Beyer, loving husband, father, grandfather and great-grandfather, died on March 1, 2016, at the age of 82. Rodney was born on February 11, 1934, in Vineland, New Jersey to Harry J. Beyer and Mary Elizabeth Harder. His family headed west when he was a child, so he spent the majority of his early life in the Los Altos, California area. Rodney married his childhood sweetheart, Delia Jean Callander, of Palo Alto, California, while attending Stanford University. They created a family of five beautiful daughters. They were sealed in the Oakland Temple in March of 1966. Rod loved to ski and hike in the Sierra and Uinta mountains. You could find him on a tennis court nearly every Saturday morning throughout his life. His overflowing bookshelves attest to his love of reading. He loved to travel and spend time in places all over the world. Rodney graduated from Stanford University as a chemical engineer. He specialized in aerospace technology, starting his career at Stanford Research Institute in Menlo Park, California. In 1973, he moved his family to Utah and settled in Provo, where he embarked upon a career in solid rocket propellant research and in mining and refining precious metals. As part of this career path, he worked as an engineer for Atlantic Research Corporation in Manasas, VA for ten years. Rodney loved the Boy Scouts of America program. He started scouting as a child, earning the rank of Eagle Scout at age 12. He also discovered that once a scout, always a scout. After serving as scoutmaster and in other positions for a number of years, he was awarded the Silver Beaver by the Utah National Parks Council. He loved serving as a missionary for The Church of Jesus Christ of Latter Day Saints. One of Rod’s favorite things to do during the last years of his life was to serve in the Provo Temple and at the Provo Missionary Training Center. Rodney is preceded in death by his parents and by his sister, Gail Bromley. He is survived by his wife, Jean Beyer, and by his brother, Dean Beyer, of West Jordan, Utah. He is also survived by his five children, Linda Mount (John) of Manti, UT; Debra Gessel (Gary) of Tacoma, WA; Sharon (Gary) Wiest of Orem, UT; Jennifer (Charles) Jenkinson of Lindon, UT; and Cathleen (Lee) Reese of Las Vegas, NV; and by 18 grandchildren and 15 great-grandchildren. Funeral services will be held at 11:00 a.m., Saturday, March 5, 2016 at the Oak Hills 4th Ward Chapel, 925 East North Temple Drive, Provo, Utah. Family and friends may call at the Berg Mortuary of Provo, 185 East Center Street, Friday from 6-8:00 p.m. and at the church Saturday from 9:30-10:45 a.m. prior to services. Interment, Provo City Cemetery. Condolences may be expressed to the family at www.bergmortuary.com.

The family of Rodney Bringhurst Beyer created this Life Tributes page to make it easy to share your memories.

Send flowers to the Beyer family.