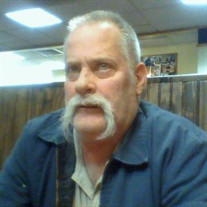 Roger began his journey in life on Saturday, December 4, 1954 in Afton, Wyoming with his parents, Lester “Brig” and Erma Rich Clark. His journey ended way too soon on Monday, December 30, 2019 in Springville, Utah. Roger’s childhood was mainly spent in Utah County. He was a big tease to his siblings and an occasional winner when they had arguments. Roger had a great love of this country. He was proud to have served in the U.S. Navy and often talked about his high sea adventures such as diving from the ship’s anchor links into the ocean and the excitement of watching the planes land and take off from the ships deck. Roger married Melodie Cobb in the mid-seventies. They were later divorced, but not before having four sons. He married Linda Boyer on December 28, 1985 and they made their home together in Payson, Utah. During their time together they raised her younger kids and four of her grandkids. Roger suffered a severe fall just days after Linda’s death, in 2016 and he never quite bounced back. He missed her terribly and often referred to himself as an orphan. He loved the trips to Laughlin, Nevada with her and getting together with his family for BBQs. We’re sure their reunion was amazing. Roger was a “Jack-of-all-trades,” but his passion was wood working. He built many beautiful pieces of furniture, remodeled many houses, and made all kinds of toys, games, and knick-knacks. The project he was most proud of was the beautiful cabin he helped build with his sister and brother-in-law, never minding that it took three years to complete. Roger was a locksmith and owned a business of his own. He could tell you anything you wanted to know about locks or keys, but kept most of what he knew a secret. He had many other jobs as well, but the one he loved most was working with his brother, Jim, in the oil fields as “doodle-buggers” using equipment to shake the ground checking for prospects of oil. Roger was a man of very few words and always had his own way of saying things. He waited for the perfect moment to add his comment to the conversation, usually being something that would cause the room to erupt in laughter. He loved to tease anyone he could and took advantage of every opportunity. He was very organized and meticulous in everything he did. He was never in a hurry to make a decision or say what was on his mind. Roger spent a lot of time hunting and fishing with his brothers, brother-in-law, and nephews. There were many stories told around campfires during their excursions and adventures together. Roger was a diehard “Survivor” fan, never missing an episode. In recent months, his son’s family looked forward to Wednesday nights and spending it with him for “Survivor” night. Roger will be remembered for his amazing canning and home cooking. The family will miss his famous elk-loaf and raspberry rhubarb pie, among many other delicious recipes. His hors d'oeuvres were a family favorite, during the holidays. His nephew mentioned at Christmas, it just wasn’t the same without them. Roger had a nickname for them that stuck but that’s a family secret. Roger was an all-around great man! He will be missed for sure. We are so grateful to have been there with him during his final days and last breaths. We can only imagine the welcome he received from loved ones who have gone before him. Roger was preceded in death by his wife, Linda; his parents; brother, Jim; and son, Bobby. He is survived by his sons, Josh (Erin) Bowers, Niel, Matthew, and J.R. Clark; grandkids, Kaidence, Haylie, and Riley Bowers; sisters, Loreta Ann Clark and Roslyn (Brent) Warenski; brother, Lester David; as well as several nephews and nieces. SEE YA LATER ALLIGATOR!!! The family thanks Mountain View Hospital and staff, with a special thanks to Dr. Kevin Colver and Will, R.N. Thanks to Stonehenge of Springville and staff with a special thanks to Scott Blakley, Administrator. Thanks to Canyon Hospice and staff with a special thanks to Allan, R.N. and Mary Louise, CNA. Funeral services will be held at 11:00 a.m., Saturday, January 4, 2020 at the Mountain View 7th Ward Chapel, 681 East 500 North, Payson, Utah. A viewing will be held from 9:30 a.m. to 10:45 a.m. prior to the service where friends may visit with the family. Interment will be in the Payson City Cemetery. Condolences may be expressed at www.bergmortuary.com.

The family of Roger Niel Clark created this Life Tributes page to make it easy to share your memories.