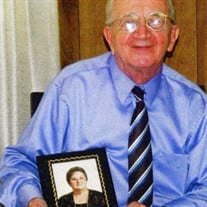 Roland Karl Bettwieser, born September 18, 1925 in Mainz, Germany, returned to his Heavenly Father on September 19, 2015. Roland received his education and served his professional apprenticeship in accounting in Germany, with the Siemens Company, where he worked during the war. Roland joined the Church of Jesus Christ of Latter Day Saints in August of 1947 and met his future bride while attending branch meetings in Streitberg, Germany. Roland and Sonja Meissner were married April 2, 1949 in Ebermannstadt, Germany and began a 54 year life together. He anxiously awaited their reunion after her passing. They were the parents of four sons: Michael, Thomas, Reinhard and Martin (Carole). Roland was preceded in death by his wife and son, Thomas. Roland immigrated to the United States in 1954 in search of better opportunities, and as he described it, “the guiding influence of his Heavenly Father”. His arrival in the States was an unexpected culture shock. He had been used to an urban environment but found himself in a sleepy college town. The first few months were spent with Heinz Hansen, the man who had baptized him into the Church. Employment was problematic, and he worked as an orderly at the State Hospital while trying to learn English, additionally supplementing his income as a field laborer. In 1956 Roland was hired into the operational accounting department at Geneva Steel where he retired in 1990. Roland is survived by three sons; seven grandchildren, Christian Bettwieser, Stephen (Anisha) Bettwieser, Summer Bettwieser, Amber (James) Nau, Travis Bettwieser, Meghan (Chase) Thiel, Levi Bettwieser and 15 great-grandchildren; they were the joy of his life. He was loved by many and will be greatly missed. Graveside services will be held at 2:00 p.m., Friday, September 25, 2015 at East Lawn Memorial Hills, 4800 North 650 East, Provo, Utah. Friends and family are cordially invited to attend. Condolences may be extended to the family at www.bergmortuary.com.

Roland Karl Bettwieser, born September 18, 1925 in Mainz, Germany, returned to his Heavenly Father on September 19, 2015. Roland received his education and served his professional apprenticeship in accounting in Germany, with the Siemens Company,... View Obituary & Service Information

The family of Roland Karl Bettwieser created this Life Tributes page to make it easy to share your memories.

Send flowers to the Bettwieser family.