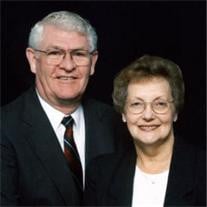 Rose Afton Whitehead, 77, passed away on February 11, 2011 due to complications from a stroke. Afton (her preferred name) was born June 15, 1933 in Goshen, Utah to Charles Christopher Jensen and Emma Louisa Bale, as the youngest of nine children. She was raised in Provo and graduated from Provo High School in 1951. She received secretarial training at the old Vocational School (now UVU). She was the school secretary at the Dixon Junior High School. She was a skilled seamstress making many of her own clothes. She married Armand Toyn Whitehead June 21, 1954 in the Salt Lake Temple. They both grew up in the old 11th Ward of the West Utah Stake. Armand served in the USAF for 8 years so they resided in Texas, Mississippi, and England. They then returned to Provo while Armand went to BYU and then to Berkeley, California where he received his Ph.D. They lived in Orem for 42 years while Armand taught at BYU. She is the mother of five children Steven Karl (Susan Law), Roseann (Ron Cram), Richard Ernest (Sandra Keller), Irene (Randy Lapp), and Mary Ann (Peter Overson). 15 grandchildren and 5 great-grandchildren lovingly remember her. Her parents and all her siblings preceded her in death. Her church service included Gospel Doctrine Teacher, Relief Society President, Stake Relief Society Board, Ward and Relief Society Chorister. She and Armand have served full-time missions in Hong Kong, Albuquerque, NM, the Asuncion Paraguay Temple, and Fresno, CA. They recently served as service missionaries at the MTC in Provo. She was a very faithful servant of Jesus Christ. She is fondly remembered for her love for people. She was very outgoing and interested in the welfare of all. She had a quick wit and a zest for life. She loved to go camping with her family. She loved her cats. Funeral services will be held at 11:00 a.m., Saturday, February 19, 2011 at the Sharon Park 1st Ward Chapel, 100 East 300 North, Orem, Utah. Friends may call at the Berg Mortuary of Orem, 500 North State Street, Friday evening from 6 until 8 and at the church Saturday from 9:30-10:45 a.m. prior to services. Interment, Orem City Cemetery. Condolences may be sent to the family through www.bergmortuary.com. In lieu of flowers, please donate to Primary Children’s Hospital.

Rose Afton Whitehead, 77, passed away on February 11, 2011 due to complications from a stroke. Afton (her preferred name) was born June 15, 1933 in Goshen, Utah to Charles Christopher Jensen and Emma Louisa Bale, as the youngest of nine children. She... View Obituary & Service Information

The family of Rose Whitehead created this Life Tributes page to make it easy to share your memories.

Send flowers to the Whitehead family.