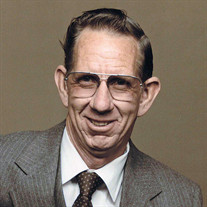 Ross DeVere Rieske, 90, of Provo returned to his Father in Heaven on Tuesday, January 28, 2020. Ross was born April 28, 1929 to Oswald and Vera Clark Rieske in Provo. He married his sweetheart Rosella Lewis on August 25, 1948 in the Salt Lake Temple. Ross grew up in Provo on the family farm and graduated from Provo High School. He spent his early years working on the farm and driving dump trucks to and from the ore mines in Western Utah. At the young age of 17, he assisted his father in starting the Rieske Sand and Gravel Company in Provo. He was a skilled heavy equipment operator and loved being at the controls of large equipment. Ross also enjoyed law enforcement and served as a police officer in both Mapleton and Provo. One night in 1956, while directing traffic, a car struck him, breaking his back in several places. He spent 11 months in the hospital, where he was told he would never walk again. A young surgeon learned of Ross’ plight and offered to perform a new surgical procedure of wiring his vertebrae together. The surgery was successful, and Ross was able to walk again, but he dealt with back pain for the rest of his life. Ross worked for BYU for 32 years in various positions with the Physical Plant and retired as the safety manager. He was a devoted member of The Church of Jesus Christ of Latter-day Saints serving many positions including; bishop, high council member, scoutmaster, cub master, teacher, and others. Upon his retirement, he and Rosella served as missionaries in Mount Pleasant, S.C. Ross loved the scouting program and served faithfully with his beloved Rosella by his side. They were both awarded the Silver Beaver for their life-long service to scouting. Ross is survived by four children: Bill (Janelle) Rieske, Richard (Debra) Rieske, Juleah (Robin) Roberts and Dianna (Robert) Richards; two sisters, Bonnie Smith and Sally (Ron) Taggart, 22 grandchildren and 20 great grandchildren. He was preceded in death by his parents, Oswald and Vera Rieske; his wife of 71 years, Rosella Rieske; daughter, Marie Neilson; grandson, Colton Richards; two brothers, Walter Rieske and Lee Rieske; and two sisters, Helen Gray and Deloris-Jean. Funeral services will be held at 11:00 a.m., Saturday, February 8, 2020 at the Provo Utah Stake Center, 1315 East 900 South, Provo, Utah. The family will visit with friends at the Berg Mortuary of Provo, 185 East Center Street, Friday, February 7 from 6:00-8:00 p.m. and at the Stake Center Saturday from 9:30-10:45 a.m. prior to services. Interment will be in the Provo City Cemetery. Condolences may be expressed to the family at www.bergmortuary.com.

Ross DeVere Rieske, 90, of Provo returned to his Father in Heaven on Tuesday, January 28, 2020. Ross was born April 28, 1929 to Oswald and Vera Clark Rieske in Provo. He married his sweetheart Rosella Lewis on August 25, 1948 in the Salt Lake... View Obituary & Service Information

The family of Ross DeVere Rieske created this Life Tributes page to make it easy to share your memories.

Ross DeVere Rieske, 90, of Provo returned to his Father in Heaven...

Send flowers to the Rieske family.