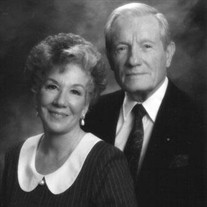 Ross Jay Taylor returned to his Father in Heaven on March 6, 2015 from causes incident to old age. He spent 96 years on this earth fulfilling that part of the plan of life and salvation in which he believed so implicitly. Ross was born to Rawson Lamoni Taylor and Eliza Allen Taylor in October of 1918, and grew up on a farm in Preston, Idaho. It was there that he met and married his High School sweetheart, Zelda Dunkley Taylor in June of 1941. Ross and Zelda enjoyed 69 years of companionship, and together experienced much of the joy, excitement, and heartache that comes with mortality. Ross was the proud father of two children, Scott R. Taylor, and Linda Taylor Bills, and completely enjoyed his roll as Grandpa to 7 grandchildren, and 21 great-grandchildren. Ross was preceded in death by his loving wife Zelda, his daughter Linda, his parents, and his two sisters Helen Wadsworth, and Marjorie Felsted. He will now find great joy in being reunited with his loved ones who have gone before. While serving a church mission in the northwestern states, Ross discovered a passion for working with people, and unexpectedly found his life-long profession with the Boy Scouts of America. Over the span of 42 years he worked to build and grow the Boy Scout organization in regions across the United States, and ended his career in Salt Lake City where he served for 12 years as Area Director, and National Director of the Boy Scouts for The Church of Jesus Christ of Latter-day Saints. Ross loved his work, and continued serving in the BSA as a volunteer many years after his retirement, during which time he was awarded the Silver Beaver, and honored as a Veteran Scout, having been registered with the BSA for over 75 years. Ross enjoyed serving in many capacities in the LDS church throughout his life. One such cherished assignment was serving as director and host of the Oakland, California Temple with his wife Zelda. They later went on to fill two service missions at the Joseph Smith Memorial Building in Salt Lake City, Utah. He was a great example of steadiness, and consistency, and on many occasions bore powerful testimony of the restored gospel. Ross Taylor was a great father, companion, friend, and grandfather, and will be remembered as a kind and understanding man by all who were privileged to know and work with him. Graveside services will be held at 11:00 a.m., Saturday, March 14, 2015 in Whitney Cemetery, Whitney, Idaho. No viewing will be held.

Ross Jay Taylor returned to his Father in Heaven on March 6, 2015 from causes incident to old age. He spent 96 years on this earth fulfilling that part of the plan of life and salvation in which he believed so implicitly. Ross was born to Rawson... View Obituary & Service Information

The family of Ross Jay Taylor created this Life Tributes page to make it easy to share your memories.

Ross Jay Taylor returned to his Father in Heaven on March 6,...