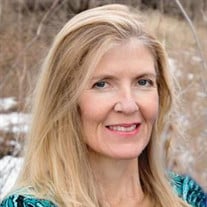 Provo, Utah – On March 13, 2017 our sweet Roxanne, (mother and wife) left this mortal existence to return to her Heavenly Father. Roxanne was born on July 18, 1964 in Smithfield, Utah to Ray and Lila Winn. She grew up in Smithfield and graduated from Skyview High School. Roxanne attended Utah State University and from there went on to serve 18 months as a missionary for The Church of Jesus Christ of Latter-day Saints in the church’s France Paris Mission. Afterwards, she returned to Provo and earned her degree in French with a History minor from Brigham Young University. Roxanne met her future husband in BYU off-campus housing and their courtship centered on their enjoyment of running. Roxanne was in much better shape than Dan and he spent most of that courtship trying to chase her down, both literally and figuratively. He did eventually catch her and they were married in the Logan, Utah LDS Temple on June 12, 1993. Roxanne loved to travel and especially loved going to Europe. She dragged her husband and boys with her on 18 European vacations and at least a dozen other holidays to Hawaii, Mexico, Virgin Islands and various educational domestic sites. Roxanne loved learning and did not believe in wasting time. She spent every moment helping others or improving herself. She home-schooled all her sons and her love of all things French is evident from the fact that her three boys all speak French. She also loved hiking and biking and believed these activities were every bit as essential to life as oxygen. In 2012 Roxanne was Provo’s first recipient of the Golden Spoke Award given for her dedication to bicycling on the city’s streets and trails. She spent countless hours, days and weeks with her family on hiking trails, climbing mountains, exploring national parks and wearing out bicycle tires on Slick Rock in Moab, streets and trails in Provo, beautiful towns in Europe and beach boardwalks in California. Next to her family and most of all, Roxanne loves the Savior and her life-long devotion to Him is the crowning glory of her mortal life. She showed her love for the Savior by doing the best she could possibly do to be like Him. Proof of her love for Him is witnessed by the priceless service she has done for strangers, friends, and family. She is preceded in death by her father Ray. She is survived by her husband, Dan and their three sons – Matthieu (22), Isaac (16) and Joseph (11); her mother, Lila; brothers, Kelly (Kristin) and Kamren; and sister, Natalie. Funeral services will be held at 11:00 a.m., Saturday, March 18, 2017 at the Parkway 5th Ward Chapel, 2801 West 620 North, Provo, Utah. Friends may call from 9-10:30 a.m. prior to services. Interment will be in the Smithfield Cemetery. Condolences may be expressed at www.bergmortuary.com.

Provo, Utah &#8211; On March 13, 2017 our sweet Roxanne, (mother and wife) left this mortal existence to return to her Heavenly Father. Roxanne was born on July 18, 1964 in Smithfield, Utah to Ray and Lila Winn. She grew up in Smithfield... View Obituary & Service Information

The family of Roxanne Winn Miser created this Life Tributes page to make it easy to share your memories.

Send flowers to the Miser family.