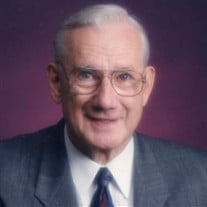 Royce was born in Salt Lake City, Utah on November 24, 1922 to Arthur L. and Claire P. Flandro. Royce died on August 13, 2018 at age 95. He is survived by his wife, Martha Facer Proctor Flandro. He married Melba Ottosen in the Salt Lake Temple in 1949. Together they had seven children who survive him: Victoria (Kent) Chadwick, Valerie (Gerry) Rovelsky, Jolene (Lance) Wells, Kent Flandro and Mike Gilliam, Barbara (Alan) Yearsley, Renae (Mark) Folkman and Gaylynne (Tobin) von der Nuell. He was very close to his siblings and is survived by: Paul W. (Marian) Flandro, Scott (Jean/Miriam) Flandro and Mark V. (Donette) Flandro. He is preceded in death by his sister Beverly (Lloyd) Call and brother Dayle R. (Mary) Flandro. From his youth, Royce championed family life, work, and service in the church and community. In school, he played football and ran track as well as participating in opera, choir, and theater. At both East High School and University of Utah, he was in ROTC, which prepared him to serve in World War II in North Africa and Italy, earning him a Bronze Star. Royce served as a Bishop, a Counselor in several Bishoprics, and on the Stake High Council for The Church of Jesus Christ of Latter-day Saints. Education was highly valued in his life. He received his Ph.D. from Indiana University and later taught at BYU for 35 years in the areas of Indian and Career Education, Educational Psychology and School Administration. Using his vast experience, he directed programs for 2 years each at Tehran University in Iran, also in Mongolia and at Utah Technical College. Work and church service continued to highlight his later years. After Melba passed away in 1985, he married Mary Jane Viehwig. Royce and Mary Jane faithfully served LDS missions in Spain, Hungary, Mongolia, U of U Institute of Religion, and Salt Lake Family History Library. After Mary Jane's passing, he married his long-time friend, Martha Proctor, who served an LDS mission with him to the Madrid Spain Temple and later served in the Provo Temple. Royce favored the Kiwanis Club motto "We Build" for many reasons, but particularly because he found himself building or rebuilding programs, structures, people and procedures. He enjoyed innovation, problem solving and spearheading in a wide variety of settings and simply went where he was truly needed. Throughout his life, Royce never stopped discovering, learning and doing. This was exemplified by his love to read, family history research, swim, boat, ski, skate and rollerblade. His life is a testament to the love of the Lord, nature, people, various cultures and especially family. Funeral services will be held at 11:00 a.m., Friday, August 17, 2018 at the Edgemont 5th Ward Chapel, 350 East 2950 North (Canyon Road), Provo, Utah. Friends may call at the Berg Mortuary of Provo, 185 East Center Street, Thursday, August 16 from 6-8:00 p.m. and at the church Friday from 9:30-10:30 a.m. prior to services. Interment will be in Eastlawn Memorial Hills. Condolences may be expressed at www.bergmortuary.com. In lieu of flowers, contributions may be made to the Perpetual Education Fund of The Church of Jesus Christ of Latter-day Saints.

Royce was born in Salt Lake City, Utah on November 24, 1922 to Arthur L. and Claire P. Flandro. Royce died on August 13, 2018 at age 95. He is survived by his wife, Martha Facer Proctor Flandro. He married Melba Ottosen in the Salt Lake Temple... View Obituary & Service Information

The family of Royce Pendleton Flandro created this Life Tributes page to make it easy to share your memories.

Send flowers to the Flandro family.