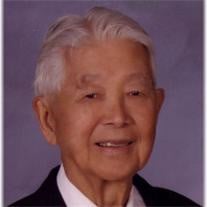 Russell Nozomi Horiuchi quietly passed away on January 15, 2011, ten days before his 88th birthday. Funeral services will be held on Saturday, January 22, beginning at 11:00 am at the Lakeridge 4th Ward, 158 East 1100 South, Orem, Utah 84058. Friends may call Friday evening, January 21 at Berg Mortuary, 500 North State, Orem, from 6:00 to 8:00 pm, and at the church Saturday morning from 10 until 10:45. Russell's humble beginnings began in Lahaina, Maui, Hawaii, on January 25, 1923, born to Mitsutaka and Kikuyo Koyama Horiuchi. After graduating from Lahainaluna High School, he attended Honolulu Vocational School where he certified as a journeyman electrician. With the outbreak of World War II he served with the U.S. Army Military Intelligence Service, arriving in Tokyo only fourteen days after the surrender of Japan. There he met and married Aiko Mori on August 6, 1947. After the war he returned to Hawaii, but he felt a need for further education. Missionaries encouraged him to attend Brigham Young University where he was honored as valedictorian in 1953. He earned his master's degree in political science at the University of California Berkeley. He taught at San Mateo Junior College in California before accepting a position at Brigham Young University Provo where he chaired the geography department. His doctorate was awarded from the University of Washington in geopolitics. At his retirement the College of Social Sciences invited him to deliver the commencement address. He will long be remembered for challenging students to think and examine interconnecting linkages. The Karl G. Maeser Excellence in Teaching Award paid tribute to his invigorating classroom style. He served as mission president of the Japan East Mission 1970-1973, and after retirement he and his wife served as Temple President and Matron of the Tokyo Japan Temple, 1988-1991. He has also served as the bishop of the BYU Asian Ward and twice as MTC branch president. Russell was a man of simple tastes and pleasures. He loved mowing his lawn twice a week. He derived great joy in distributing the harvest from his garden. His home was always graced by friends, former students, missionaries, and neighbors dropping by for a visit. Each heard Russ' gambare—"do your best," and "save your money" lectures, and was better for it. He was a master fisherman, nearly always bringing home his limit, even when others had no nibbles. More importantly, he was a fisher of men, listening, counseling, and encouraging the discouraged, guiding careers, and celebrating accomplishments. Though he rubbed shoulders with the powerful and rich, he never forgot his peasant roots. He was a common man of principle who had an uncommon touch. He is survived by his wife, Annette Aiko; daughter, Ellen (Stephen) Williams of Texas; grandson, Scott Hurst of Salt Lake City; and sister, Kathleen Horiuchi of San Francisco. Condolences may be sent through www.bergmortuary.com or [email protected]

The family of Russell Horiuchi created this Life Tributes page to make it easy to share your memories.

Send flowers to the Horiuchi family.