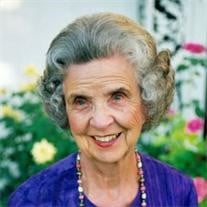 Ruth Hobson Biddulph, 98, died in Provo, Utah on May 11, 2010. She was born in Ogden, Utah on August 17, 1911, the eldest of two children of George Cornelius Hobson and Agnes Hanson. She spent her childhood and youth in Utah, her married life in Rexburg, Idaho, and the last twenty-five years, since her husband’s death, in Provo, Utah, in an apartment lovingly built on to the home of Clyn and Marilyn Barrus. Throughout her life, Ruth has been a faithful member of The Church of Jesus Christ of Latter-day Saints. Her entire adult life has been spent in service. She relinquished teaching the Gospel Doctrine class when she turned 92, but continued to be a daily student of the scriptures to the very end of her life. She served with her husband as an ordinance worker in the Idaho Falls temple, as a stake and ward Relief Society President, secretary to her patriarch husband, and a mission to Nauvoo with him. Subsequent to his death in 1985, she served a temple mission in Washington D.C.; for eighteen years she served as a missionary at Temple Square Visitor’s Center and a docent at the Church’s Art Museum. She was an active member of the Provo Literary League and the Daughters of the Utah Pioneers. Ruth married Lowell G. Biddulph in the Salt Lake Temple on May 25, 1931. They made their home in Rexburg, Idaho and enjoyed fifty-four years of marriage prior to his death in 1985. She is the devoted mother of six children (five living), twenty-nine grandchildren, seventy-nine great-grandchildren, eleven great-great-grandchildren. She possessed a passion for learning, and teaching, graduating from Ricks Junior College in 1930 and Brigham Young University in 1935, receiving a Master’s Degree from Utah State Agricultural College (now Utah State University) in 1957. She also did post-graduate study at Indiana University and Rutgers University in Literature. At Ricks College (BYU-Idaho) she was a renowned teacher of English, and American Literature, specializing in Children’s Literature from 1949 until 1974. She received the Teacher of the Year award and the children’s Literature portion of the library was named after her. Twenty-two of those years she served as the faculty advisor for the Valkyries, a women’s service organization, as well as advisor for the Associated Women Students Association. She continued as an active supporter of BYU-Idaho all her life. She loved the dramatic arts, performed in many theatrical productions and gave dramatic readings for public occasions at Ricks College and in the community. She cultivated a deep love for all creations of nature during thirty-three summers that she lived in Yellowstone with her husband who served there as a ranger naturalist. She also loved the world of ideas and actively followed political and current events. She was also a prolific poet and was a life-long enthusiast for athletics, especially those sports her husband coached at Ricks College. Until her early nineties, she traveled the earth, riding elephants in India, flying over the mountains of Tibet, visiting China, the former Soviet Union, and South America, and doing a wild animal safari in Africa. “I wanted to live deep and suck out all the marrow of life.” (Henry David Thoreau). She is preceded in death by a daughter, Barbara; her husband, Lowell; her brother, Stan Hobson; and her parents. She is survived by her five children: Howard (Colleen), Provo; David (Colleen); North Carolina; Susan Sheffield (William), Minnesota; Marilyn Barrus Bradshaw (Jerald), Provo; Stephen (Elaine), Provo. Funeral Services will be held at 3:00 p.m., Saturday, May 15, 2010 at the Oak Hills Stake Center, 925 East North Temple Drive, Provo. Friends may call at the Stake Center on Friday evening, May 14, from 6:00 – 8:00 p.m. and again on Saturday, May 15, from 1:30 – 2:30 p.m. Interment, East Lawn Memorial Hills, Provo. Condolences may be emailed to [email protected]

Ruth Hobson Biddulph, 98, died in Provo, Utah on May 11, 2010. She was born in Ogden, Utah on August 17, 1911, the eldest of two children of George Cornelius Hobson and Agnes Hanson. She spent her childhood and youth in Utah, her married life... View Obituary & Service Information

The family of Ruth Biddulph created this Life Tributes page to make it easy to share your memories.

Send flowers to the Biddulph family.