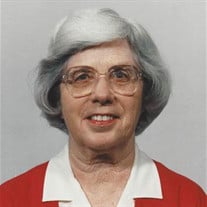 Ruth Ellen Weinheimer Folsom passed away peacefully in her home in Provo on July 22, 2015. She was born March 3, 1927, in Cardston, Alberta, the fourth child of seven to Jacob Weinheimer and Wilhelmine Boos, German immigrants from Eastern Europe. Her childhood was spent in Glenwood, Calgary, and Welling, Alberta. She had two years of teacher education at the University of Alberta in Calgary and Edmonton. She taught one year at the Welling School, in order to earn enough to attend Brigham Young University, with the intention of majoring in foreign languages, primarily German and French. Her first year was partially funded by her earnings (35 cents an hour) working at a dry cleaning outlet close to campus. She was encouraged by the Language Department professors to enroll in a couple of quarters of typing, so that she could be employed as a secretary and reader in the Language Department at the increased salary of 50 cents an hour. From that point on, the old North Building became her home, and the German, French, Spanish, Latin, Slavic, etc. professors her family. At BYU she was awarded a BA and an MA in German and French Literature. Unable because of family circumstances to participate in the first BYU student tour abroad, she had her own private tour a couple of years later, 1953-54. She married Marvin Hugh Folsom, a fellow language student, September 12, 1956. With him she achieved many of her childhood dreams, including finding and visiting behind the Iron Curtain her mother’s siblings, not to mention sabbaticals living abroad with the entire family. She also served in many leadership and teaching callings in the LDS Church. She and her husband served as LDS missionaries in Lithuania (Baltic States); Freiberg (Leipzig) Germany; and teaching English at a University in Shanghai, China. Her favorite teaching assignments in the Church were Gospel Doctrine in Sunday School and Cultural Refinement in Relief Society. Ruth and Marvin were eager travelers to many parts of the world, but also their beloved state of Utah. Her children are Susan (Paul) Hansen, Alpine, Utah; Cindy (Craig) Jonsson, Highland, Utah; Richard Lee Folsom (Qian), Hong Kong, China; Cheryl (Keith) Rose, Provo, Utah; and Robert Alan Folsom (Michele), Orem, Utah. Her surviving siblings are Doris (Jay) Salmon, Calgary, Alberta; Gerald Walter Weinheimer (Janice), American Fork, Utah; and Gordon Ernest Weinheimer (Nancy), Ivins, Utah. Brothers Eric and Herbert Weinheimer and sister Edith Griffin are deceased. Funeral services will be held at 11:00 a.m., Tuesday, July 28, 2015 at the Grandview 9th Ward Chapel, 1555 North 1350 West, Provo, Utah. Friends may call at the Berg Mortuary of Provo, 185 East Center Street, Monday, July 27, from 6-8:00 p.m. and at the church Tuesday, from 10-10:45 a.m. prior to services. Interment will be in East Lawn Memorial Hills. Condolences may be extended to the family at www.bergmortuary.com.

Ruth Ellen Weinheimer Folsom passed away peacefully in her home in Provo on July 22, 2015. She was born March 3, 1927, in Cardston, Alberta, the fourth child of seven to Jacob Weinheimer and Wilhelmine Boos, German immigrants from Eastern Europe.... View Obituary & Service Information

The family of Ruth Ellen Folsom created this Life Tributes page to make it easy to share your memories.

Ruth Ellen Weinheimer Folsom passed away peacefully in her home...

Send flowers to the Folsom family.