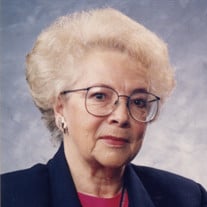 After a long and valiant life, our lovely Mom, Ruth Bowers Robison Mercer, 94, passed away on April 24, of causes incident to age. She was born in McGill, Nv to Arthur and Sarah Bowers Robison on Sept 5, 1920. Her father died when she was 4. Her mother Sarah, Ruth, and sister Lillian moved many times to live with relatives in southern Utah. Her mother remarried and they settled in Holden, Ut. Ruth graduated from Fillmore High school and then attended college in Cedar City, Ut. She spent time in California working as a nanny, and then worked at the Itel-Mccauley plant in Salt Lake City making and testing vacuum tubes that were used in bomber planes in World War II. She worked in Bryce Canyon during the summers, and she met her future husband, Winston Mercer, who played in the dance band there. On October 8, 1945, Ruth married Winston in El Paso, Texas while he was serving in the Army. They settled in Provo and raised their family of seven children: Gary (Susan) Mercer, Patricia (Sherlan) Ligman, Cathy (Randall) Brereton), Phillip (Karla) Mercer, Melinda Mercer, Susan Urie, Randy Mercer. She is survived by her children, 19 grandchildren, and 35 great-grandchildren, 1 great-great-grandchild, and brother and sister-in-law JD and Marjorie Evans. Winston died in 2012. Ruth and Winston were married for 67 years. She will be reunited with Winston, her parents, sister Lillian, as well as many friends and neighbors that have passed on. Ruth was a very loving and patient wife and mother. She was mother of a busy household for many years. After the children were all in school, she started working at Mountain Fuel Gas Co. Starting as a Home Economist, she ended her career there as a secretary. She worked until she was 71 years old. Ruth had a sweet personality. She had great sense of style and decorating. She was artistic and enjoyed doing many crafts. She was a fantastic cook, and a doting grandmother and great-grandmother to her large family. Our mother had a lively sense of humor! Her health began to fail in the last few years. She accepted her limitations with grace and always expressed her gratitude to those who helped her. She has been living in the Beehive Home of Orem for the past year. Many thanks to them as well as Brighton Hospice for their loving care of Ruth. Funeral service will be held at 11:00 a.m., Wednesday, April 29, 2015 at the Berg Draw-ing Room Chapel, 185 East Center Street, Provo. Friends may call at the mortuary from 10-10:45 a.m. prior to services. Interment, Provo City Cemetery. Condolences may be sent online at www.bergmortuary.com.

After a long and valiant life, our lovely Mom, Ruth Bowers Robison Mercer, 94, passed away on April 24, of causes incident to age. She was born in McGill, Nv to Arthur and Sarah Bowers Robison on Sept 5, 1920. Her father died when she was 4.... View Obituary & Service Information

The family of Ruth Bowers Robison Mercer created this Life Tributes page to make it easy to share your memories.

After a long and valiant life, our lovely Mom, Ruth Bowers Robison...

Send flowers to the Mercer family.