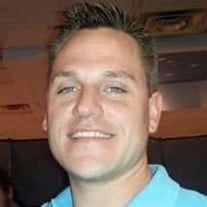 Ryan Walker Brown, 36, a 3 year resident of Dillsburg, PA, formerly of Severna Park, passed away on July 23, 2016. He was born on July 5, 1980 in Washington, D.C. and was raised in Severna Park. He attended Severna Park High School and graduated from Chesapeake High School. Ryan was a supervisor in building restoration and he held several certifications in the field. He also served for a brief time in the U.S. Army. He will be remembered for his devotion to his family and friends and for his indomitable spirit in life, his passion for sports, and his witty sense of humor. He was preceded in death by his late mother, Laura Chloe Brown, and his late grandfathers, John Charl Brown and Earl Walker. He is survived by his father, Charles T. Brown (Lynn); his son, Landon Michael Brown; his fiancé, Michele Burns; two brothers, Scott Brown and Tom Brown (Katie); sister, Katy Warren (Scott); three stepsisters, Leah Russell (Rand), Janel Fleming, and Laurel Castagna (Troy); two stepbrothers, Micah Fleming (Rachel) and Alex Fleming; grandmothers, Kathryn Brown and Mary Louise Walker; and many nieces and nephews. Family and friends may visit on Thursday, July 28, 2016 from 6-8 pm at Barranco & Sons, P.A. Severna Park Funeral Home, 495 Ritchie Highway. A Funeral Service will be held on Friday, July 29, 2016 at 11 AM at The Church of Jesus Christ of Latter-Day Saints, 1875 Ritchie Highway, Annapolis. Memorial contributions may be made to Teen Challenge, P.O. Box 1222, Harrisburg, PA 17108. Online condolences may be made at www.barrancofuneralhome.com Graveside services will be held at 11:00 a.m., Monday, August 1, 2016 at the Provo City Cemetery, 610 South State Street, Provo, Utah. Friends may call at the Berg Mortuary of Provo, 185 East Center Street, from 9:30-10:30 a.m. prior to services. Condolences may be expressed at www.bergmortuary.com.

Ryan Walker Brown, 36, a 3 year resident of Dillsburg, PA, formerly of Severna Park, passed away on July 23, 2016. He was born on July 5, 1980 in Washington, D.C. and was raised in Severna Park. He attended Severna Park High School and graduated... View Obituary & Service Information

The family of Ryan Walker Brown created this Life Tributes page to make it easy to share your memories.