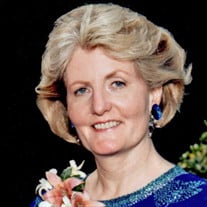 Sara (Sally) Tueller Finch passed away peacefully on January 8, 2022, with family by her side in her home in Wilmington, Delaware. Born and raised in Provo, Utah, daughter of Elvena and Walter Tueller, Sally enjoyed 67 years of marriage to her college sweetheart, David G. Finch. Dave and Sally met at Utah State University and were married in the Salt Lake Temple on Sally’s 20th birthday, June 18, 1954. After that wonderful day, she made her children promise never to get married on their birthday. Sally and Dave raised four daughters, Barbara (Guy), Beverly (Steve), Jeanene (Kelly), and Susan (Tom), and one son, Bradley (Ranae). Her children draw strength from their upbringing, gathering with extended family and celebrating Sally’s Danish and Swiss heritage. Sally loved spending time with (and nicknaming) her beloved 18 grandchildren and 8 great-grandchildren. Sally and Dave loved traveling the world and enjoyed living in different states and countries, but Wilmington, Delaware was the place they called home for the last 56 years. Some of their favorite trips included a hot air balloon ride in Turkey, the Passion Play in Oberammergau, and an elephant ride in Thailand. Her trip to Paris in 1980 included a large essential suitcase filled with diet Shasta cola. Sally’s day did not begin until she had cracked open her first diet cola of the morning. Sally was a faithful member of The Church of Jesus Christ of Latter-day Saints, where she enjoyed serving others in various callings, her favorite of which was being “Sister Friendly” for her Primary children. A few other callings include Washington, D.C. and Philadelphia Temple worker, Relief Society President (twice), and Stake Missionary in the Rising Sun, Maryland Branch. Beginning as a young mother, she had a passion for genealogy and gathered and documented family stories and histories. Her love of chocolate led to the creation of Sara’s Country Chocolates, Sally and Dave’s candy business. Their hand-dipped assorted chocolates, turtles, krunch, and other candies were creatively packaged by Sally and shipped all over the world. Sally is survived by her husband and two of her sisters, Anne Ahlstrom and Mary Stewart. She was preceded in death by her sister, Katherine Stott. A viewing will be held from 3-5:00 p.m., Sunday, January 16, 2022, at the Doherty Funeral Home, 3200 Limestone Road, Wilmington, Delaware. Family and friends are invited to visit from 9:30-11:30 am, Saturday, February 5, 2022, at the Berg Drawing Room Chapel of Provo, 185 East Center Street, Provo, Utah. Funeral services will follow at 12:00 p.m. Masks are encouraged. After the funeral, a video of the service will be available on Berg Mortuary’s website. Condolences may be expressed at www.bergmortuary.com.

Sara (Sally) Tueller Finch passed away peacefully on January 8, 2022, with family by her side in her home in Wilmington, Delaware. Born and raised in Provo, Utah, daughter of Elvena and Walter Tueller, Sally enjoyed 67 years of marriage to... View Obituary & Service Information

The family of Sally T. Finch created this Life Tributes page to make it easy to share your memories.

Send flowers to the Finch family.