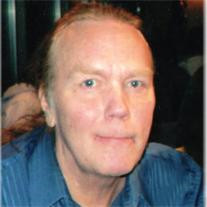 Sam Adrian Foster passed away on June 13, 2012 in his beloved Uinta Mountains. He was born May 31, 1953 in Spokane, Washington to Robert and Delora Foster. He had a typical military upbringing, traveling the country from Washington to Utah, Florida to New Mexico. He graduated from high school in Bowling Green, Kentucky in 1972. From 1972-1974 he served an LDS mission in Sao Paulo, Brazil. He discovered the drums at age 8. From then on he was constantly drumming with his fingers or seen carrying a pair of drumsticks; this was the beginning of a life-long love affair with music. His first "gig" was of the family-band variety (his mom and brothers) in Athens, Georgia. Little did he know he would later have the opportunity to tour the world with a celebrity family, the Osmonds, as their drummer for 7 years. In addition to being a professional musician, he made many contributions in the field of sound recording. He was friendly and outgoing, opinionated and always ready to argue for the underdog. Especially caring about the homeless and downtrodden, he had an influence which impacted many lives. He wanted everyone to know they were worth something. Possibly the band Pink Floyd's biggest fan, he was creative and talented, quirky and "crazy-fun." His greatest love was his family. He is survived by his wife Maria, father Robert, brothers Steve and Dan, seven children: Aaron Foster (Emily), Megan Rhodes (Nick), Lindsay Leavitt (Justin), Tamara Foster, Nikki Foster, Tasha Tipton (John), Zac Foster, and seven grandchildren. He was preceded in death by his older brother Clyde and his mother Delora. Funeral services will be held at 11:00 a.m., Monday, June 18, 2012 at the Provo Peak 8th Ward Chapel, 502 East 200 North, Provo, Utah. Friends may call at the Berg Mortuary of Provo, 185 East Center Street, Sunday evening from 6 until 8 and at the church Monday from 9:30-10:45 a.m. prior to services. Interment, Orem City Cemetery. Condolences can be sent from his obituary at www.bergmortuary.com.

Sam Adrian Foster passed away on June 13, 2012 in his beloved Uinta Mountains. He was born May 31, 1953 in Spokane, Washington to Robert and Delora Foster. He had a typical military upbringing, traveling the country from Washington to Utah,... View Obituary & Service Information

The family of Sam Foster created this Life Tributes page to make it easy to share your memories.