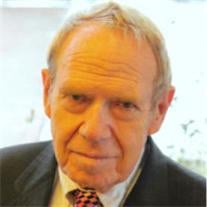 Dr. Samuel Jensen Hammond M.D., beloved father and grandpa, passed away on Monday, October 24, 2011, reunited with loved ones beyond the veil. He was born in Idaho Falls, ID, on February 22, 1935, to Samuel S. and Norma Jensen Hammond. Sam grew up in nearby rural areas, where he discovered his second-favorite pastime—fishing. He served the Lord for two years in the LDS West Germany Mission, where he developed a life-long fondness for the people and the language. He graduated from Brigham Young University, and then studied medicine at the University of Oregon. During medical school, he married Suzanne Stratford, December 23, 1960. Embarking upon his career, he found his favorite pastime was caring for and treating patients, who in turn came to love "Dr. Sam" both as a friend and as a physician who would help at all hours of the night. Dr. Sam practiced family medicine in the Provo/Orem area for 36 years, from 1972 to 2008. He is survived by Suzanne Hammond and their children—two daughters, Shelby Hammond of Orem, UT, and Stephanie Hammond-Atwood (Cameron) of Spanish Fork, UT; and two sons, Samuel S. Hammond (Lisa) of Riverton, UT, and Shawn Hammond (Patty) of Cedar Rapids, IA. Spending time with them and his seven grandchildren—Klein, Ashton, Cameron, Dallin, Gavin, Harley, and Jason—filled his later years with immense joy and pride. He served others in many callings in The Church of Jesus Christ of Latter-day Saints, including bishop and stake high council. He loved singing hymns and studying Church history. He is preceded in death by his mother, father, and brothers. We love and miss you, Grandpa Sam! Special thanks to Bishop Jonathan Haws who provided daily care for the past several months. Funeral services will be held at 10:00 a.m., Saturday, October 29, 2011 at the Lindon LDS Chapel, 1051 East 200 South, Lindon. Friends may call at the Berg Mortuary of Orem, 500 North State Street, Friday evening from 6 until 8 and at the church Saturday one hour prior to services. Condolences may be sent to the family online at www.bergmortuary.com. Interment will be at Groveland Cemetery near Blackfoot, Idaho.

Dr. Samuel Jensen Hammond M.D., beloved father and grandpa, passed away on Monday, October 24, 2011, reunited with loved ones beyond the veil. He was born in Idaho Falls, ID, on February 22, 1935, to Samuel S. and Norma Jensen Hammond. Sam grew... View Obituary & Service Information

The family of Samuel Hammond, M.D. created this Life Tributes page to make it easy to share your memories.