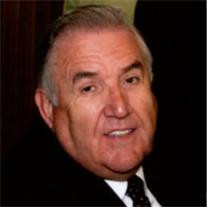 Samuel George Liddiard of Provo, Utah passed away peacefully Sunday morning May 15, 2011 from complications of surgery. He was born January 22, 1940 in Provo, Utah to Walter Mills and Emily Donaldson Liddiard. He grew up in Provo, Utah attending Franklin Elementary, Dixon Jr. High, and Provo High School. Dad held degrees from Utah Technical College and Brigham Young University. He joined the United States Army in 1958 and served with the 1st Calvary at Fort Campbell Kentucky. He was later transferred and served in Korea. He married the love of his life Leola Anne Dean in May 1959 in the Salt Lake Temple. Dad worked for many years at Dugway Proving Ground. He worked for the maintenance branch, security, and retired from the transportation office in 2000. Dad often told stories about growing up in the Provo 6th Ward. He had numerous tales of hunting and fishing as a young man growing up with his friends. Dad loved his family. He would often be found fishing with his grandsons and great-grandsons who were such a joy in his life. Dad served as Bishop of the Dugway Ward, and again as Bishop of the North Park 3rd Ward in Provo. He has held many church positions including serving on the High Council in two different Stakes. Dad would often talk about traveling to Tooele with fellow High Councilmen whom he considered the best of friends. Dad loved serving with the brethren of the church. Dad was recently serving a church service mission at the employment office in Provo, a calling he will never be released from. Dad wanted to serve a mission his entire life and was thrilled to be called on a service mission. Dad was preceded in death by his mother and father and one grandson. He is survived by his wife of 52 years, Leola, daughter Joy (Greg) Bougard Alabama, sons Sam (Robyn) Liddiard American Fork, and Jef (Michelle) Liddiard Illinois, 14 grandchildren, 11 great-grandchildren, his brothers Robert (Diane) Salt Lake, Don (Mary) Springville, and sister Walene (Larry) Decker Lehi. Funeral services will be held at 11:00 a.m., Thursday, May 19, 2011 at the North Park 3rd Ward Chapel, 1066 West 200 North, Provo. Friends may call at the Berg Mortuary of Provo, 185 East Center, Wednesday evening from 6 until 8 and at the church Thursday one hour prior to services. Interment, American Fork City Cemetery. Condolences may be sent through www.bergmortuary.com or [email protected]

Samuel George Liddiard of Provo, Utah passed away peacefully Sunday morning May 15, 2011 from complications of surgery. He was born January 22, 1940 in Provo, Utah to Walter Mills and Emily Donaldson Liddiard. He grew up in Provo, Utah attending... View Obituary & Service Information

The family of Samuel Liddiard created this Life Tributes page to make it easy to share your memories.

Send flowers to the Liddiard family.