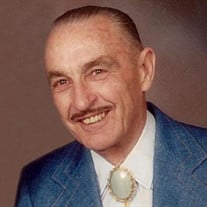 Born in Payson, Utah on June 25, 1918. Died January 22, 2016. Long time Orem resident. He married the love of his life, Adele Stevens, October 11, 1940. She passed away December 8, 2009. They were known for their healthy living and brilliant dancing. He would make Lawrence Welk proud. He served in the Seabees in the South Pacific during WWII. Parents Garrett and Louie Conk. Grandfather was Daniel Stark. Survived by three children, LouAnn (Kevin) Matt, Steven (Jocelyn) Conk, Angie (Sam) Earle and brother, Jack Conk, Mesa, AZ. Siblings who predeceased him were Leo, Farrell, Arvil, and Beth Conk. Dad was a shining example to us of a hard worker who gave us a strong work ethic. Graveside services will be held at 12:00 noon, Tuesday, January 26, 2016 at the Payson City Cemetery, 805 East 40 North, Payson, Utah. Friends may call at the Berg Mortuary of Provo, 185 East Center Street, from 10:30-11:30 a.m. prior to services at the cemetery. Condolences may be extended to the family at www.bergmortuary.com.

The family of Samuel (Sam) Garrett Conk created this Life Tributes page to make it easy to share your memories.

Send flowers to the Conk family.