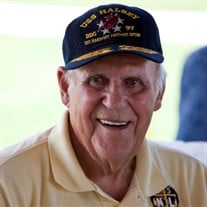 World War II veteran Samuel (Sam) Anders Sorenson passed away peacefully at his home on Saturday, March 10, 2018 from cancer. He was 101 years old. Sam was born in his grandparents’ home in Holden, Utah on May 20, 1916. He lived in Delta, Utah until around 1929. His family then moved to Springville, Utah, where he graduated from high school. Sam attended Brigham Young University, where he graduated in drama and speech in 1938. He joined the United States Navy in March 1941 and served throughout World War II commanding combat photo unit No. 9 in the South Pacific. He served under both Admiral Chester Nimitz and Admiral William Halsey. Many of his photos were used not only during the war but after the war and are archived throughout the United States. Sam was discharged from active service in January 1946, but remained in the active Navy Reserve until 1967. After the war, he returned to BYU to work on a graduate degree. There he met Jean Anderson, whom he married in 1949. Beginning in the early 1950s, he worked for the Navy as a civilian at the Naval Training Devices Center in New York, and later for the Army at the Deseret Test Center in Salt Lake City, Utah. After his wife Jean’s death in 2000, Sam married Blanche Broadhead Evans, whom he had known in college before the war. They were married from 2001 until her death in 2005. In 2007, he moved to Fredericksburg, Texas to be close to where Admiral Nimitz, whom he had known personally during the war, grew up and was honored. He was extremely active at the Nimitz Museum as well as with the Navy League. He continued to be enormously proud of his military service throughout his life. Sam was also an active member of the Fredericksburg Branch of The Church of Jesus Christ of Latter-day Saints. He is survived by his sons Anders (Lynette), Eric (Anita), Grant (Laura), Robert (Lisa), James (Julia) as well as 20 grandchildren and 11 great-grandchildren. He was preceded in death by his parents, Andrew Sorensen and Martha Bennett, and siblings Kimball, Woodrow, Inger (Vernon Nuttall), Mary Annena, and Dawna (Arvil Banks). Funeral services will be held at the National Museum of the Pacific War (Nimitz Museum Ballroom) at 340 E. Main St., Fredericksburg, Texas, on Wednesday, March 21. The family will be there at 6:00 p.m. and funeral services will begin at 6:30 p.m. Additional services will be held at 2:00 p.m., Saturday, March 24, 2018 at the Berg Drawing Room Chapel, 185 East Center Street, Provo, Utah. Friends may call from 1-1:50 p.m. prior to services. Interment will follow at the Provo City Cemetery. Condolences may be expressed at www.bergmortuary.com.

World War II veteran Samuel (Sam) Anders Sorenson passed away peacefully at his home on Saturday, March 10, 2018 from cancer. He was 101 years old. Sam was born in his grandparents&#8217; home in Holden, Utah on May 20, 1916. He lived in Delta,... View Obituary & Service Information

The family of Samuel (Sam) Anders Sorenson created this Life Tributes page to make it easy to share your memories.

Send flowers to the Sorenson family.