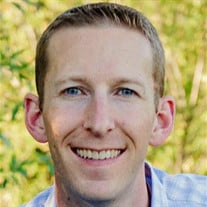 Scott Andrew McMahan, 34, passed away peacefully on October 23, 2016 surrounded by members of his family. He was born in Boise, Idaho on November 1, 1981, to Brian and Carrie McMahan. Scott spent most of his youth in McCall, Idaho where he excelled in athletics, academics, served as student body president and graduated from McCall-Donnelly High School. He served a mission for the LDS church in Tallahassee, Florida where his love for the gospel of Jesus Christ took root in his heart. Scott attended Brigham Young University in Provo, Utah where he studied Business-Finance and met his wife LeAnn Ord. They were married on September 30, 2005 and both graduated from BYU in April 2006. Scott and LeAnn found their first jobs in Idaho Falls, Idaho. One year later, they moved to East Lansing, Michigan where Scott earned an MBA from Michigan State University. While living there, they were blessed with their first beautiful child, Halle Ann. Upon graduating, Scott and his family moved to West Chester, Ohio where he accepted a job with Procter & Gamble. In West Chester, they welcomed Maxwell Scott and later Thomas Andrew to the family. Scott’s greatest joy was his wife and the family they created together. He served diligently as the bishop of his LDS ward until the time of his passing. Scott will always be remembered for his unwavering faith, his missionary spirit and his unconditional love for everyone he knew. Scott is survived by his devoted wife LeAnn and their three children, Halle, Max and Thomas. He is also survived by: his grandparents, LaVerne and Lois McMahan and Carol Andreasen; his parents, Brian and Carrie McMahan; and his siblings Josh (Shari), Lane (Megan), Annie (Dain), Kate, Ian and Mike. Funeral Services will be held on October 27th in Ohio with visitation from 9 – 10:45 am and services at 11 am at The Church of Jesus Christ of Latter-day Saints, 7118 Dutchland Pkwy, Liberty Township, OH 45044. Graveside Services will be held at 11:15 a.m., Tuesday, November 1, 2016 at the Provo City Cemetery, 610 South State Street, Provo, Utah. Friends may call at the Berg Drawing Room Chapel, 185 East Center Street, Provo, Utah, from 10-11:00 a.m. prior to services at the cemetery. Condolences may be expressed to the family at www.bergmortuary.com Those wishing to make a donation can do so at gofundme.com: Scott McMahan Family Memorial.

Scott Andrew McMahan, 34, passed away peacefully on October 23, 2016 surrounded by members of his family. He was born in Boise, Idaho on November 1, 1981, to Brian and Carrie McMahan. Scott spent most of his youth in McCall, Idaho where he... View Obituary & Service Information

The family of Scott Andrew McMahan created this Life Tributes page to make it easy to share your memories.

Send flowers to the McMahan family.