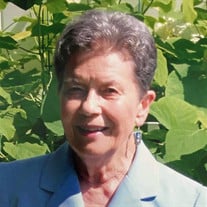 Sharee Westover Sorensen passed away Monday, March 11, 2019 surrounded by her loved ones at home in Legacy House of Spanish Fork. She was born in Provo, Utah on July 21, 1929 to Jacquita and Charles Nello Westover. Sharee grew up in Provo. She loved her life there. She talked of remembering sitting on the front steps of her house waiting for her dad to come home from playing the saxophone in his band at night. She attended Joaquin Elementary School, Farrer Junior High, and graduated from Provo High School. She made her school years fun by being involved. Throughout those school years she was involved with the student council, was part of a group of friends called the Dizzy Dozen, and loved being a cheerleader in high school. She graduated in 1947 and then attended BYU majoring in Home Economics. During her college years she dated a lot of men. She was dating one particular man and thought that she would probably marry him; however, there was one more gentleman she wanted to go on a date with first. That man was Charles Thomas. They worked together to teach dance classes, fell in love, and were married January 5, 1951 in the Salt Lake City Temple. They lived in Provo for a couple of years before moving to Malad, Idaho so that Charles could take over the family farm. Sharee immersed herself in her new home and life with gusto. She and Charles had five children together, one son, Eric and four daughters, Teri, Kris, Kathy, and Wendy. She loved making a home for her family. She continually cooked, baked, cleaned, and sewed most of the clothes the family wore. She made 12 loaves of bread every Wednesday. Each holiday she would make a variety of cookies and candy and made sure her children were involved in the process. She was an active member of The Church of Jesus Christ of Latter-day Saints. She was also an active leader in the 4H program, the PTA, American Legion Auxiliary, Primary, Relief Society, and many other community and church organizations. She was given the gift of using her hands to make many beautiful things. The family moved away from Malad in 1977, and Sharee began a new life in Utah County. After moving to Orem, Sharee began her career working as a receptionist and assistant to her brother-in-law and orthodontist, Lawrence Clarke. She worked for him for 21 years. His only stipulation was that if she worked for him, she would work until he retired. He retired in 1998 and Sharee retired with him. The Clarke family loved Sharee. Every time that Lawrence and Carole would go on vacation, Sharee would move in with the family and take care of their children like they were her own. She loved them, and they loved her. Over the years, many patients of Dr. Clarke would say that Sharee took the time to get to know each one individually, and they felt very welcome when they had their visits. On November 2, 1983, Sharee married Stewart J. Sorensen for time in the Provo Temple. Together they had a lot of fun. They were part of a foursome with Sharee’s brother and wife, Bob and Jan Westover. They had many adventures throughout the years, traveling to many fun places. They were able to go on many cruises together. Sharee again built a wonderful life with Stu and his two children, Larry and Shelly. There were many family parties and impromptu dinners. As she associated with the Sorensen’s and Shakespeare’s, she grew to love them and feel as though she were part of the family. Stu passed away in March of 2015 and Sharee moved into Legacy House in Spanish Fork, Utah. There she continued to be loving and giving to all. Anytime someone new would work with her she would take time to get to know who they were and their life story. She always passed that knowledge to her children when they visited. Any time a new resident moved into Legacy, Sharee would take time to introduce herself and get to know them. Sharee definitely added to the world she lived in. It didn’t matter where she lived or what she did. Everyone loved her and appreciated who she was. She is preceded in death by both husbands, Charles Thomas and Stewart Sorensen, her parents, Jacquita and Nello Westover, a brother, Bob, and many others she loved. She is survived by her siblings, Jim Westover, Kaye (Duane) Jeffery, Carole (Lawrence) Clarke, and Lynnae (Vadim) Klishko; her children and step-children, Eric (Deb) Thomas, Teri Wallis, Kris (Mike) Nemelka, Kathy Thomas, Wendy (Joe) Dimond, Shelly (Mark) Seastrand, and Larry (Judy) Sorensen. She has 23 grandchildren, 31 great-grandchildren, and two great-great-grandchildren. Her children would like to invite all who loved Sharee to celebrate her life at a funeral service to be held on Thursday, March 14, 2019 at 11:00 a.m., at the Berg Drawing Room Chapel, 185 East Center Street, Provo, Utah. Viewings will be held at the mortuary Wednesday, March 13 from 6-8:00 p.m. and Thursday from 9:30-10:45 a.m. prior to services. Interment will be in Eastlawn Memorial Hills. Condolences may be expressed at www.bergmortuary.com. They would like to thank everyone at Legacy House in Spanish Fork and One Care Home Health and Hospice for the loving care she was always given.

Sharee Westover Sorensen passed away Monday, March 11, 2019 surrounded by her loved ones at home in Legacy House of Spanish Fork. She was born in Provo, Utah on July 21, 1929 to Jacquita and Charles Nello Westover. Sharee grew up in Provo.... View Obituary & Service Information

The family of Sharee Westover Thomas Sorensen created this Life Tributes page to make it easy to share your memories.

Send flowers to the Sorensen family.