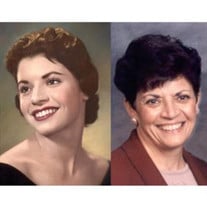 The Life Volume of Sharon Lee Wood Kresge has been returned to the Circulation Desk, from where it has been checked-out and on-hold for 82 years. There is no late fee. There is no fine. She has returned exactly on time. Her Book of Life has been requested by a Higher Branch. The below reference material, an extract of her works, is for all who loved her most-recent edition. Sharon Lee Wood Kresge, of Orem Utah, passed away peacefully, surrounded by her family, on June 16, 2022, after a short but valiant battle with pancreatic cancer. She was born May 10, 1940 in Elmira, Chemung County, New York, the daughter of Lilian Virginia Vizine and Morris Feinburg. Sharon’s early years in upstate New York were marked by struggle and hardship. But she persevered through the difficulties, thanks to the support of her younger brother Gary and her best friend Barbara. Despite the hard times of her youth, she became a loving and honored mother, grandmother, great-grandmother, mentor, teacher, and friend to all. As a child, she loved school, studied diligently, and graduated from Elmira Free Academy. Her greatest joys in youth came during extended summer visits to her Italian grandparents and extended family. From an early age, she worked a variety of jobs to support herself and her family – including stints as a doctor’s assistant, a desk-clerk in a Jewish Community Center, at a Soda Fountain, and at the front desk of a YMCA day camp, where she first met Bob Kresge, a “cute lifeguard,” who later became her husband. As a young teenager, Sharon was impressed watching the school reference librarian, who helped everyone find what they were looking for and seemed to know the answer to any question. She decided that was something she would like to do someday. Sharon often mentioned the “love and light” that emanated from the Kresge family and wanted to feel that in her own life. Despite opposition from her family, Sharon investigated the Church of Jesus Christ of Latter-day Saints over a two-year period and was eventually baptized a member. Since then, she often remarked to her posterity how different it felt to have the Spirit with her. Sharon married Robert Lee Kresge Sr. on December 16, 1959 in the Manti, Utah Temple. The couple lived in a variety of locations, including South Carolina and the Philippines, while Bob served the US Air Force. Eventually their children numbered six, and the family built a home in south-west Orem, where they lived for the past 52 years. For 31 years, Sharon worked as a Librarian for the Orem City Public Library. She spearheaded the volunteer program for youth who were looking to give public service, including many who were ordered to provide community service by the courts. She taught many at-risk young men and women how to circulate books back onto shelves and other skills. Over the years, she became a valuable friend and trusted ally. Many credit her for putting them on the path to becoming responsible citizens. She became a friend to police officers and personnel in other city departments. She loved her job, and loved working with patrons. Many considered Sharon their favorite librarian and would wait in line for her to check them out. Often, she provided delicious meals for large groups of Orem City employees at festive gatherings. Sharon worked with the founding committee for the Timpanogos Storytelling Festival, to raise funds for the Orem library. Sharon oversaw the efforts of hundreds of volunteers necessary to stage this community event. She loved to read, enjoyed all kinds of music, made all things beautiful, was a marvelous cook, and especially liked listening to a grandchild while she made them a meal. She hardly ever stopped working. She was always busy, making the lives around her more enjoyable. Sharon often said the happiest moments of her life were being with family, especially annual vacations to Bear Lake with children and grandchildren. But she didn’t just care for her own family. For many years she rushed home from the library to put pots on the stove or something in the oven for neighbors, co-workers, friends or even friends-of-friends who were sick or struggling. She brought so many wonderful dishes to people over the years that it’s a wonder she had any serving dishes left for the family to use. She even invited perfect strangers to share holidays with the family -- and even found presents for them. She loved her Heavenly Father and strived to represent Jesus Christ in her charity toward others. She was an active member of the Church of Jesus Christ of Latter-day Saints and served in multiple callings throughout her life, including many in the Relief Society. She is still remembered for her inciteful cultural refinement lessons. For several years, after her retirement, it brought her such joy to serve as a temple worker in both the Timpanogos and Provo Temples. She was heartbroken when she could no longer serve in the temple during the pandemic. Sharon and Bob served a mission for their church from 2013 to 2015, assigned to the Manilla, Philippines Temple. She learned to love the wonderful, faith-filled Filipinos with whom they worked. Sharon is survived by her husband (of 62 years), Robert Lee Kresge Sr., children Teryll (Paul) Stout, Robert (Sherel) Kresge, Kimberly (Terry) Bickmore, David (Kimberli) Kresge, Kristen (Jaime) Zamora, and daughter-in-law Stacy, as well as 26 grand-children, 15 (and continuing) great-grandchildren. She is also survived by her half-brother Gary (Kathy) Wood of Texas. Sharon was preceded in death by her parents, her son Daniel, and her half-brother Robert “Bobby” Wood of Elmira, New York. Memorial services will be held Wednesday, June 22, 2022, at 11:00 a.m. at the Lakeridge 6th Ward, 80 West 900 South, Orem, Utah 84058. Friends may visit with the family from 10-10:45 a.m. prior to services. An immediate-family-only grave dedication will follow at Orem City Cemetery. On-line condolences to: https://www.bergmortuary.com/obituaries/Sharon-Kresge/ The memorial service can be viewed via Zoom, using the link below: Join Zoom Meeting https://us04web.zoom.us/j/74936569396?pwd=9AgMPYgIOqX5uF9kRLxXlUp9RX42-5.1 Meeting ID: 749 3656 9396 Passcode: 6rCUDR

The Life Volume of Sharon Lee Wood Kresge has been returned to the Circulation Desk, from where it has been checked-out and on-hold for 82 years. There is no late fee. There is no fine. She has returned exactly on time. Her Book of Life has... View Obituary & Service Information

The family of Sharon Lee Wood Kresge created this Life Tributes page to make it easy to share your memories.

The Life Volume of Sharon Lee Wood Kresge has been returned to...

Send flowers to the Kresge family.