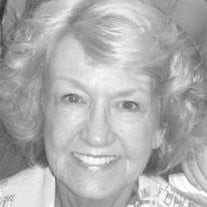 Sharon Lee Brittain Jacobs, 81, of Provo, died Monday, Dec 2, 2013 at her home in Provo, peacefully in her sleep. Though she struggled for many years with health problems, she was a fighter and a proud survivor of breast cancer. She was born July 25, 1932 in Los Angeles, California, a daughter of Vernon Brittain and Mary Jaxie Kelley Brittain. She graduated from Leuzinger High School in Hawthorne, California, where she fell in love with and married her high school sweetheart, Lyle. She married Dr. Lyle Allen Jacobs, September 5, 1952 in Inglewood, California and their marriage was later solemnized in The Salt Lake Temple on October 6, 1955. She was converted to The Church of Jesus Christ of Latter-day Saints in 1951. She faithfully served in many different organizations and callings in the church. She especially loved being a Mia Maid leader in the Young Women. In their early years of marriage, Sharon supported Lyle as he went through medical school and they started a family. She had a difficult time with infertility and was blessed with one biological child. She and Lyle then went on to adopt four more beautiful children. After living in Salt Lake City for Lyle’s residency, they settled down in Provo, Utah where they lived the remainder of their lives as a family. Sharon had many interests and was very talented in many areas. She loved to dance and was quite athletic. She taught an aerobics class for years and is known for her lively spirit. Sharon always had an eye for what was beautiful. She was an interior decorator and after her husband died in 1996, she spent some time building her home—a dream they shared together—in Heber City. She planned out and designed the whole thing herself, naming it “Jake’s Place Farmhouse” after her sweetheart. A place meant for family, she enjoyed spending time there with those she loved. Traveling was one of Sharon’s favorite things to do. She traveled all over the world, often with her children, grandchildren, or sister by her side. A beach girl at heart, she could often be found with her sister Shirley in Newport Beach. She also loved touring on motorcycles with her husband Lyle. Sharon was a strong and loving woman. Known for her classy style and big heart, she was a leader to those around her. Her greatest joy and legacy are her grandchildren. She was a devoted mother, sister, and friend, and a great example to all of a most devoted grandmother. Sharon is survived by her children, Jennifer Jacobs Moon (Robert), Provo, Utah; Andrew Todd Jacobs, Lehi, Utah; Roxanne Jacobs Boshard (Robert), Draper, Utah; 21 grandchildren; Sara (Tommy), Erin (Troy), Carissa, Andrew, Justin, Megan, Jacob (Michelle), Zachary (Estefania), Julie Ann, Molly Jane (Jeffrey), Alexander, Jenica, Jordan, Jacey, Riley, Jocelyn, Kaitlyn, Drew (Tanner), Mackenzie, Boomer, and Hannah; 11 great-grandchildren; Samantha, Parker, Hannah, Jackson, Boston, Stella, Britton, Brynlee, Beckham, Alexandria, Isla; one sister, Shirley Crosby (Donald) of Newport Beach, California; dear friend and adopted sister, Sally Hamblin. She was preceded in death by her husband Lyle, son Joseph Michael, and daughter, Julie Ann. Funeral services will be held at 11:00 a.m., Friday, December 6, 2013 in the Edgemont South Stake Center, 2950 N. Canyon Road (350 East), Provo. Friends may call Thursday, December 5, 2013 from 6 to 8 p.m. at Berg Mortuary, 185 East Center Street, Provo and at the church Friday from 9:30-10:45 a.m. prior to services. Interment will be in the Orem City Cemetery. Condolences may be sent at www.bergmortuary.com.

Sharon Lee Brittain Jacobs, 81, of Provo, died Monday, Dec 2, 2013 at her home in Provo, peacefully in her sleep. Though she struggled for many years with health problems, she was a fighter and a proud survivor of breast cancer. She was born... View Obituary & Service Information

The family of Sharon Lee Brittain Jacobs created this Life Tributes page to make it easy to share your memories.

Send flowers to the Jacobs family.