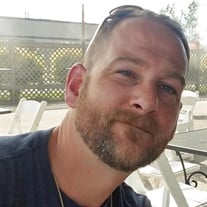 Our loving father, son, brother, uncle, and friend, Shaun Michael Williams (41) of Orem, Utah passed away unexpectedly on Friday, November 6, 2020 surrounded by his family and friends. Many reached out asking how they can help and we felt the best way would be to help secure his daughter, Annabelle's future. Shaun had big dreams for her and education was of the utmost importance to him. All funds will be put into a trust for Annabelle that she will be able to access when she is older. Please contribute at https://www.gofundme.com/f/jyggbs-in-loving-memory-of-shaun-williams. Shaun was born in Provo, Utah to Robyn & Linda Williams on June 4, 1979. He graduated from UVU with his Associates degree and enjoyed his career as a software engineer at Xactware. Shaun took every opportunity he had to be outdoors with those that he loved. He was always ready for an adventure with his best friends since childhood, Dave, Elvin, and Jeff. Their tradition every year was the Jeep Safari in Moab. Shaun was an avid reader and had a thirst for knowledge and zest for life. His greatest adventure, fatherhood, began on January 13, 2009 when his beautiful daughter Annabelle Marie was born. He was also a father to Annabelle’s siblings, Angelina and Daxton and loved their mother Jenn dearly. Shaun had a smile that was as bright as the sun and had the ability to light up every room he entered. He made everyone around him laugh and was always going above and beyond for everyone he came in contact with. Those that were lucky enough to meet Shaun left him knowing they had a friend and confidant for life. Shaun is survived by the love of his life, Jenn; his daughter, Annebelle; Jenn’s children, Angelina and Daxton; father, Robyn; mother, Linda (Mike); and his siblings, Owen Williams (Emma), Shannon Farley (Shane) and Kemmer Williams (Suzanne). He is also survived by his beloved nieces and nephews, Hailey, Owen Jaxon, Connor Williams, Kennedy and Regan Farley; and his forever friends that were more like family, David Hamblin, Elvin Nez, and Jeff Jacobs. He was preceded in death by his grandparents, Martha and Valjean Williams and James Owen Webster. A viewing will be held from 11:00-11:50 a.m., Friday, November 13, 2020 at the Berg Drawing Room Chapel, 185 East Center Street, Provo, Utah. A small memorial service will begin after the viewing at Berg Mortuary. A graveside prayer will commence directly after at the Orem City Cemetery. Condolences may be expressed at www.bergmortuary.com. If anyone would like to donate to funeral costs and medical bills please contribute through Venmo at @Jenny-Brown27.

Our loving father, son, brother, uncle, and friend, Shaun Michael Williams (41) of Orem, Utah passed away unexpectedly on Friday, November 6, 2020 surrounded by his family and friends. Many reached out asking how they can help and we felt the... View Obituary & Service Information

The family of Shaun Michael Williams created this Life Tributes page to make it easy to share your memories.