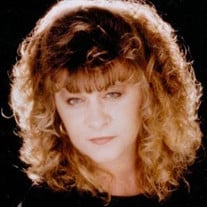 Sheri Lee Williams-Wood (born Sherida Lee McCormick) passed away at the age of 66 on Sunday, March 05, 2017 in Provo, Utah. Sheri was born in Barstow, California on November 10, 1950 to Edwin Earl McCormick and Frances Elaine McCormick (Lee). She was their only child until they adopted Brandon when she was a teenager. She married Robert Dennis Williams on June 6, 1969. They had two sons, Robert David Williams and Jason Brent Williams. They divorced in April of 1975. She married Leonard Scott Wood on April 1, 1989. They were married for 27 years, and were one month shy of their 28th anniversary when she passed. She was raised in Barstow California and in addition to living in California, also lived in Hawaii and in Utah. Sheri achieved her associate’s degree from Barstow Community College while being a mother to two young boys. Sheri had an entrepreneurial spirit. She loved running her own businesses. With Scott and her children she ran several, including Island Yogurt and Sandwich Company in Hawaii, Cougarabilia in Utah, and JRC in both Hawaii and Utah. She was preceded in death by both parents, and she is survived by her husband Scott, brother, Brandon, sons; Robert (Emma), and Jason (Jamila), and 7 grandchildren. Graveside services will be held at 1:30 p.m., Friday, March 10, 2017 at the Pleasant Grove City Cemetery, 500 North 100 East, Pleasant Grove, Utah. Friends may call at the Berg Mortuary of Provo, 185 East Center Street, Thursday, March 9, from 6-8:00 p.m. Condolences may be expressed at www.bergmortuary.com.

The family of Sheri Lee Williams-Wood created this Life Tributes page to make it easy to share your memories.

Send flowers to the Williams-Wood family.