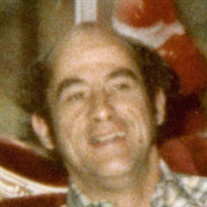 Sherman Albert Wall Jr. passed from this earthly life on Friday, November 20, 2020 in Provo, Utah, just short of his 80th birthday. Sherm was born January 3, 1941 in Payson, Utah to Sherman and Genevieve Sudweeks Wall; the oldest of 4 boys. His brothers are Mike (deceased) (Linda) of St. George, UT; Merrill (Sherri) of St. George, UT; and Jeff (Kendra) of Provo, UT. Sherm met his late wife Margaret Mann and they were later married on January 21, 1966 in Provo, Utah. At the time of her death they had been married 49 wonderful years. Together they raised 2 daughters: Julie (Larry) Oviatt of Cleveland, UT and Kristen Roy of Wendover, NV. Sherm and Ellen have left behind a wonderful posterity of 8 grandchildren: Angelique, Patrick, Skylar, Chabacca, Jacobus, Apollo, Mariah and Savanah and 16 great-grandchildren: Lyla, Jack, Junior, Tony, Mary, Vyctoria, Rosa, Margarita, Deliana, Natalie, Alexander, Annabelle, Loretta, Joel, Aria and Christian. They cherished the time they spent with all of them. Sherm was born with Cerebral Palsy but he never let it slow him down. His parents moved to Provo so that they could be by the best schools for him. Sherm attended a special school in Provo. He attended Farrer Jr. High until he was 18 years old. He loved telling people that he got his driver's license when he was in Jr. High. Sherm was a very good mechanic and loved to fix things. He fixed lawnmowers for all of his family, friends and neighbors. Sherm worked for many years at Snows Auto as a mechanic. He also worked for Harolds Lounge in Provo where he made many lifelong friends. Sherm’s favorite thing before he entered the Provo Care Center was to put on his favorite cowboy hat, jump on his Jazzy and head to Walgreens for chocolate milk or stop by Tommy Burger where they treated him like family and gave him free hamburgers. Sherm was a great example to his younger brothers, always showing them how to work hard and always do their very best. Sherm will be missed by so many. Graveside services will be held at 2:00 p.m., Monday, November 30, 2020 at the Provo City Cemetery, 610 South State Street, Provo, Utah. Friends may call at the Berg Mortuary of Provo, 185 East Center Street, from 12:30-1:30 p.m. prior to services at the cemetery. There will be an open mic for anyone who would like to share special thoughts or memories that they have of Sherm. Condolences may be expressed to the family at www.bergmortuary.com.

The family of Sherman Albert Wall Jr. created this Life Tributes page to make it easy to share your memories.