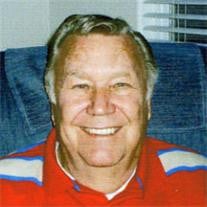 Life for one of this world’s most loving husbands, father, grandfather and great-grandfather ended suddenly from heart failure on February 2, 2011 at his Provo, Utah home, with his beloved wife of 56 years, Valene, at his side. Sherwin Johnson’s journey of 80 years began on May 26, 1930 at the Crane Maternity Home in Provo, where he was welcomed into the world by his mother, Iris Webb Johnson, and father, Lafeyette Mads Johnson, joining his brother, Myron, sister Nelda, with brother William (Bill), yet to come. Sherwin called himself a depression baby, and talked about a childhood filled with patched clothes, flower sack undershirts, and cardboard stuffed shoes. He said that none of that mattered because he was never hungry and always felt loved, besides, everyone he knew was just like him! The love of those good friends and family filled his heart. Those same people filled his yard with games and laughter making it the neighborhood place for fun. Sherwin often spoke of his great friends, like LaVor Madsen, or his cousin, LaVerl (Tink) Johnson, and the pranks they would pull and the inventions they would create. He would later help his children and grandchildren with homemade games and projects that never required batteries or a power cord, just an imagination and the time to let that wonderful man take them on a magical childhood memory. Sherwin was a proud graduate of Union elementary and Lincoln High, carrying on the memories of schools no longer standing. He was especially proud of his Army service during the Korean War. His experience was full of twists and turns that allowed his unique skills to shine. Near the end of his service he represented the U.S. Forces in France at the prestigious cross country skiing competition with the rest of Europe. He finished 8th out of 20 competitors in the grueling race. He found the love of his life upon his return home, and married Valene Brookbush in the Logan temple in 1955. Sherwin worked as an Engineer, draftsman, surveyor and contractor, and was proud of his contributions on many projects around Utah. He was a gifted woodworker and carver, creating many unusual works of art. Sherwin and Valene raised 3 beautiful daughters, Sherilyn, JaNay and Michelle. They in turn allowed him to leave his lasting, loving imprint on their lucky children. All were included on trips to Disneyland, Cabo San Lucas, Jackson Hole, Idaho, neighboring canyons, fishing trips, or Sunday dinners, where all shared his stories and felt his love. One of his favorite trips was the annual Birthday trip to St. George, where his family gathered to celebrate his 80th Birthday last May. Sherwin loved his faithful dogs that were always a part of his life. Kirby and Mister Magoo were two of his most loved friends, Mister is still waiting patiently for Sherwin to pick him up and scratch his tummy. Somehow, we believe he will find a way! Sherwin is survived by his loving wife, Valene Johnson, 3 daughters, Sherilyn (Scott) Sasso, Gilbert, AZ; JaNay (Brett) Lowe, Boise, Idaho; Michelle (Cal) Wimmer of American Fork, UT; 11 grandchildren that were the light of his life: Andrea (Patrick) McNiel, Ryan Bee, Austin Lowe, Maloree (Daniel) DeMille, Alex Lowe, Kylee Bee, Tyree Bee, Adam Lowe, Lauren Sasso, Lynsey Sasso, Ashlee Lowe, and 3 great-grandchildren: Nathan and Katelyn McNiel, and Ethan DeMille. He is also survived by his brothers: Myron (Joyce) Johnson, and Bill (Georgia) Johnson. He was preceded in death by his parents, and a sister, Nelda Foote. Sherwin’s love and light lives on in all of us. Funeral services will be held at 11:00 a.m., Wednesday, February 9, 2011 at the Grandview 10th Ward Chapel, 1600 North 1880 West, Provo, Utah. Friends may call at the Berg Mortuary of Provo, 185 East Center Street, Tuesday evening from 6 until 8 and at the church Wednesday one hour prior to services. Interment will be at the Provo City Cemetery with full military honors. Condolences may be sent to the family through his obituary on www.bergmortuary.com.

Life for one of this world’s most loving husbands, father, grandfather and great-grandfather ended suddenly from heart failure on February 2, 2011 at his Provo, Utah home, with his beloved wife of 56 years, Valene, at his side. Sherwin Johnson’s... View Obituary & Service Information

The family of Sherwin Johnson created this Life Tributes page to make it easy to share your memories.

Life for one of this world’s most loving husbands, father, grandfather...