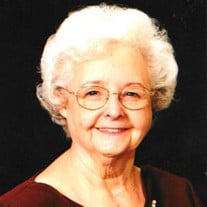 Sheryl Young Cordner Allman passed away at age 87, on February 19, 2015 from natural causes. She was cared for by her granddaughter, Cyndi Cordner and Maple Creek Hospice Center. Sheryl was born on May 6, 1927 to George Spencer Young, Jr. and Eunice Olson in Idaho Falls, Idaho. She is the third of eight children. Sheryl lived in Provo, Utah for the majority of her life. She attended and graduated from Provo High School. She married and was sealed to James Calvin Cordner on April 28, 1948 in the Salt Lake Temple. The couple was blessed with two sons, Curt and Daniel. They were happily married for 41 years, until he passed away. Sheryl later married Grant Allman on August 20, 1992. They enjoyed six years travelling together to many places. Sheryl worked for Intermountain Healthcare as a billing representative. She loved to travel around the world and always talked about her favorite trip which was to Jerusalem. Sheryl won many awards for her gingerbread houses with her sister, Marilyn. She always had a cheerful attitude, never turned her back on anyone, and loved everyone. Sheryl is survived by her son, Daniel (with his wife – Korey) of Long Beach, California; daughter-in-law, Claudia Cordner of Orem, Utah; sisters, Iloa Gregory and Julane Young of Layton, Utah; brother, Steve Young (with his wife – Marcia) of Ogden, Utah; 7 grandchildren, and 4 great-grandchildren. Sheryl was preceded in death by her parents, George Spencer Young, Jr. and Eunice Olson; both of her husbands, James Calvin Cordner and Grant Allman; brothers, Gail Spencer Young, Mark Olson Young, and James Nolan Young; sister, Marilyn Young Keyte; and son, Curt Cordner. Funeral services for Sheryl Young Cordner Allman will be held at 11:00 a.m., Wednesday, February 25, 2015 at the Grandview 9th Ward Chapel, 1555 North 1350 West, Provo, Utah. Friends may call from 9:30-10:45 a.m. prior to services. She will be laid to rest in the Provo City Cemetery, 610 South State Street, Provo, Utah. Condolences may be sent to the family at www.bergmortuary.com.

Sheryl Young Cordner Allman passed away at age 87, on February 19, 2015 from natural causes. She was cared for by her granddaughter, Cyndi Cordner and Maple Creek Hospice Center. Sheryl was born on May 6, 1927 to George Spencer Young, Jr. and... View Obituary & Service Information

The family of Sheryl Young Cordner Allman created this Life Tributes page to make it easy to share your memories.

Sheryl Young Cordner Allman passed away at age 87, on February...

Send flowers to the Allman family.