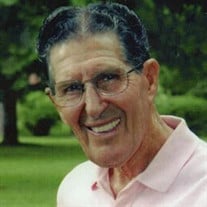 Shirley Joseph Hunter “Papa” passed away unexpectedly on June 23, 2015, just one month shy of his 96th birthday. He was born in Vernal, Utah, July 24, 1919, to Clarence Walter Hunter and Clara Burton Hunter. He was thrilled every year on the 24th of July when the state celebrated his birthday. He also connected with the birth of A&W root beer in the year 1919. It was his favorite brand. He always told people he had his life planned out until he turned 100 and then he would take it a day at a time. Papa grew up in Provo, Utah, along with his seven brothers and sisters, all preceding him in death. He met his sweet wife, Ila Barney at a dance one night and it was love at first sight. They were married on February 26, 1941, and later sealed in the Salt Lake Temple. Their loving, eternal marriage has been an example to his family as they weathered heartache through the years. His sweetheart, affectionately known as Nana, passed away in 2003. To this eternal union they were blessed with five beautiful children, two of whom are still living. The posterity left behind will be blessed into the eternities because of the strength and love they have shown and taught to each and every one of us. Papa was a perfectionist down to the smallest detail. There was nothing he couldn’t fix. An electrician by trade, he worked for a number of years at Geneva Steel and then went to work at the State Hospital in Provo as their Chief Engineer. He retired from there. He served in the Army Air Corp. during WWII. His knowledge of repairing the plane radios kept him in the states during the war, much to the relief of Nana. His fishing and hunting skills have been passed down to many family members and will be passed down from generation to generation in many years to come. Papa was blessed with a strong testimony of the Gospel of Jesus Christ. His service to the Lord was evident in how he lived his life. There wasn’t a drop of judgement in his body. He loved everyone he met, and was known for his hugs. Anyone who went to Nana and Papa’s house didn’t leave before getting a hug. He served in many capacities for the Church with many people being a recipient of his love and service. One of his greatest joys was serving in the Provo Temple. His love of serving his children and numerous grand, great-grand,-and great-great-grandchildren has given us many wonderful stories that will be passed down in all our histories for many generations to come. Thank you, Papa for always being there. He is survived by his children, Larry B (Vada) of American Fork, UT and Deanna Hunter of Antioch, California, 11 grandchildren, 26 great-grandchildren and 13 great-great-grandchildren. He was preceded in death by his parents, wife Ila, daughter Gloria Jean, son Dennis Jay, daughter Shirleyne (Alex) and grandson Cory. Funeral services will be held at 11:00 a.m., Saturday, June 27, 2015 at the Bonneville 5th Ward Chapel, 90 South 900 East, Provo, Utah. Friends may call at the Berg Mortuary of Provo, 185 East Center Street, Friday, from 6-8:00 p.m. and at the church Saturday, from 9:30-10:45 a.m. prior to services. Interment will be in the Provo City Cemetery. Condolences may be extended to the family at www.bergmortuary.com.

Shirley Joseph Hunter &#8220;Papa&#8221; passed away unexpectedly on June 23, 2015, just one month shy of his 96th birthday. He was born in Vernal, Utah, July 24, 1919, to Clarence Walter Hunter and Clara Burton Hunter. He was thrilled every... View Obituary & Service Information

The family of Shirley Joseph Hunter created this Life Tributes page to make it easy to share your memories.

Send flowers to the Hunter family.