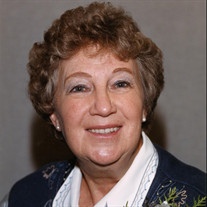 With family by her side, Shirley Lona Gallup Bedard, age 83, joined her Heavenly Father on Tuesday, October 23, 2018 in South Ogden, Utah following complications from Alzheimer’s. Shirley was born on a small farm in Guilford, Vermont on August 4, 1935 to Richard and Lona Gallup. She was the youngest of three children with a sister Arlene and brother Franklin. She told stories of being chased by the big turkey there and then refusing to eat it when he was prepared for Thanksgiving. That was her earliest memory at age three. Her family then moved to Brattleboro, Vermont, with her father’s parents, where they rented an 11-room house on Washington Street. Her mother was her hero and she admired all she was able to do for their family during that difficult time of conserving and rationing for the war effort. She recalls eating chip beef gravy on toast, liver and onions, and codfish cakes. Stretching food was always a challenge and homemade bread with real butter and hot chocolate was an amazing treat. She said they didn't have much but were rich with friends and therefore had enough. She met her future husband, George “Eddie” Bedard, in grade school and decided he must've liked her when he began chasing her on his bike. They began dating in high school and he would treat her to a movie each weekend and then try to fatten her up with a milkshake. To this day ice cream is her favorite. He joined the Navy when he was 17 and they married a year later on April 9, 1955 when she graduated from high school. They honeymooned in New York City and she said she was so glad to get out of that crowded and busy place. She lived with her parents while he toured far off countries, like Japan. She was so proud of her sailor boy. When she was pregnant with their first child, she insisted they start her labor so he could see the baby before he had to report back to the ship. It was a long and difficult delivery with only minimal relief from the whiffs of ether they allowed her. At one point she grabbed the mask, above her head, and took a deep breath knocking herself out. She woke up a mother! They had five children and were married 13 years before they divorced. Now on her own, she spread her wings and learned to drive, bought a second-hand car, and got her first job as teller at First Vermont Bank in Brattleboro. She continued in the banking career until she retired at age 70. When the Mormon missionaries first came to teach her daughter the gospel in 1971, Shirley hid in the kitchen and refused to hear their message. Over time, she not only fed all the missionaries in the surrounding area of Brattleboro, Vermont, but was baptized, with four of her children, on March 12, 1972 at the Joseph Smith Memorial in Sharon, Vermont. She and her young family attended the small branch held in a Grange Hall each Sunday. Three years later, she shocked her extended family when she announced she was selling her home and moving to Utah. Her family and friends thought she was crazy to leave everything behind on such a foolish venture. After loading up the Ryder van and stuffing two dogs and five kids into the truck and car, she waved goodbye and started the journey West. Each night she cooked dinner on the tailgate of the truck and the kids set up the tent as they traveled 3,000 miles to Provo, Utah. She was a modern-day pioneer destined to provide a better life for her family. Her greatest joy found her surrounded by family and sharing in the many moments of their lives. From graduations to weddings, the birth of 20 grandchildren and several housewarmings, farewells and homecomings, Shirley was found at the center of any celebration. She happily whirled into action from preparation to clean-up planned months ahead. She loved the smell of turkey at Thanksgiving and the lights of Christmas on her tree. She loved fireworks on the 4th of July and her daughters coming together on Mother's Day to fill her yard and pots with colorful flowers. Most of all, she gained strength from those around her and found joy and gratitude in time spent together. She appreciated a clean home and a well-cared for yard and was often seen sweeping the gutter down her street or pulling weeds in her yard or her neighbor's. She was always a hard worker with a plan to accomplish the most possible in a single day. She served in many church positions where she lived for over 40 years. The youth in Young Women's and Primary programs enjoyed her stories and young spirit. She spent many hours organizing Relief Society events and dinners and serving as a Compassionate Service leader and Visiting Teacher to those around her. They appreciated the light within her that she willingly shared. In later years she became aware her memory was fading but trusted those who cared for her. She maintained a hopeful spirit and with their love, learned and believed she could do hard things. Shirley is survived by her sister, Arlene Houghton of Walpole, NH and brother, Franklin (Una) Gallup of Dummerston, VT. Children: Debra (Mark) Rogers, South Ogden, UT; Danny (Amy) Bedard, Cedar City, UT; Diane (Dave) Anderton, Highland, UT; Doreen Bedard, Sandy, OR; Donna (Doug) Roe, St. George, UT; 20 grandchildren and 32 great-grandchildren. She was preceded in death by her parents; brother, Richard Atwood and nephew, Steven Gallup. Funeral services will be held on Saturday, October 27, 2018 at 11:00 a.m. in the Berg Drawing Room Chapel, 185 East Center Street, Provo, Utah. Friends may visit with the family at the mortuary on Friday, October 26 from 6:00-8:00 p.m. and Saturday from 9:30-10:50 a.m. prior to services. Interment will be at Provo City Cemetery. Condolences may be sent to the family at: www.bergmortuary.com.

With family by her side, Shirley Lona Gallup Bedard, age 83, joined her Heavenly Father on Tuesday, October 23, 2018 in South Ogden, Utah following complications from Alzheimer&#8217;s. Shirley was born on a small farm in Guilford, Vermont... View Obituary & Service Information

The family of Shirley Lona Gallup Bedard created this Life Tributes page to make it easy to share your memories.

With family by her side, Shirley Lona Gallup Bedard, age 83,...

Send flowers to the Bedard family.