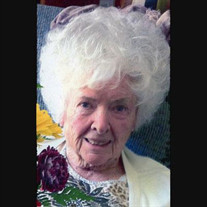 Shirley Mae Harbertson Knowles of Provo, Utah, passed away September 17, 2016 at 7:00 a.m. at the age of 94. She was born September 16, 1922 in Ogden, Utah to Brigham Y Harbertson and Gladys V. Lewis. She married Elmer M. Knowles October 29, 1941 in the Salt Lake Temple. Shirley graduated from Ogden High School in 1940. She left her home in Utah to go with her husband and three children to Detroit, Michigan, then to Ithaca, New York, East Lansing, Michigan, Laramie, Wyoming, and Lubbock, Texas where she had her fourth child. Though Shirley was often homesick, she was one to find many friends wherever she went. Her kind, loving gentle nature drew people to her. In 1962, the family returned to Utah where Elmer took a teaching position at Brigham Young University in Provo, Utah, where they lived for the remainder of their lives. She loved to make porcelain and ceramic pieces and was involved in that craft for many years, making beautiful things for her family and friends. She enjoyed working in her yard, decorating her home, bowling, and volunteering at the hospital. She loved to read and was involved in a book club for many years. She was an avid sports fan, often having two televisions and a radio going at the same time so she wouldn't miss a thing. She was a member of The Church of Jesus Christ of Latter-day Saints where she held many positions serving with true charity. She and Elmer worked at the Missionary Training Center in Provo for 10 years. Mother was the angel in our lives. She thought the best of others and rarely had an unkind word to say. We loved her laugh. Everyone did. She was a beautiful person inside and out. Even though she suffered for many years with dementia, she was always gracious and kind; making everyone feel loved and appreciated. We will miss her every day. We love you, Mother. Shirley was preceded in death by her husband of 74 years, Elmer M. Knowles. She is survived by her children, Gary (Arlene) Knowles of Riverton, Elaine (Bob) Brady of South Jordan, Colleen Knowles of Provo, Richard Bryan Knowles of Katy, Texas; 10 grandchildren and 19 great-grandchildren; and her brother Lynn (Loretta) Harbertson of Milford Michigan. Funeral services will be held at 1:00 p.m., Friday, September 23, 2016 at the Edgemont 8th Ward Chapel, 3050 Mojave Lane, Provo, Utah. Friends may call from 12 to 12:40 p.m. prior to services. Interment, East Lawn Memorial Hills. Condolences may be extended to the family at www.bergmortuary.com

The family of Shirley Mae Harbertson Knowles created this Life Tributes page to make it easy to share your memories.

Send flowers to the Knowles family.