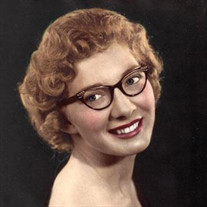 Shurlene was born on the Fourth of July, 1937, to Gwynn Moir and Preston Lee Norton, in Provo, UT, and died peacefully in Richland, WA on January 16, 2017. Shurlene graduated from Provo High School in 1955, where she was a member of the Pep Club. She lived in the Beehive House while attending college in Salt Lake City, UT. She was a member of a women’s choir and taught ballroom-style dancing. She met and married Gilbert A. Roundy while working in a local bank. Together they settled in Kenmore, WA, where they were both active in the Kenmore community, working with the Chamber of Commerce, Rotary and involved with the Community Club. Upon retirement, they moved to Kettle Falls, WA, where they were again active in the community, working with the Kettle Falls Rotary, and this time Shurlene finally became a member. Shurlene joined the Colville Hospital Auxiliary, where she helped make the Christmas wreaths seen around the community, and in winter made the stockings in which the newborn babies were wrapped to go home for the first time. Shurlene was the Treasurer for the Kettle Falls Senior Citizens. She became an amateur radio operator just before the turn of the century and participated in several Panorama Amateur Radio Club events, including Y2K. From the time they met, Gil and Shurlene lived for their vacations and weekends, planned with activities and trips. Along with numerous trips home to Utah to visit and play with family, they traveled across the western states and Tennessee, into Canada and Mexico, as well as Hawaii, Puerto Rico, Germany and Austria. She was an avid snow and water skier and loved to sing and dance with the love of her life, Gil. Shurlene was known for her willingness to participate in everything from going for a car ride to digging. In 2015, Shurlene moved to Tri-Cities, WA, where she enjoyed her final years close to her daughter and son-in-law, meeting new people and seeing new places. She was preceded in death by her husband of 50 years, Gil, and by her sister Noreen Norton. She is survived by her step-father Charles E. Thornton, sisters DeAnn Rae Norton and husband Gary Johnson of Provo, UT, Pat and husband Robert Prince of Colville, WA, daughter Lisa Gwen Roundy and husband David Noland of Benton City, WA and numerous nephews and nieces across the U.S., as well as many precious friends. Funeral services will be held at 11:00 a.m., Friday, January 27, 2017 at the Parkway 7th Ward Chapel, 2876 West 1390 North, Provo, Utah. Friends may call from 10-10:45 a.m. prior to services. Interment will be in the Provo City Cemetery. Condolences may be expressed at www.bergmortuary.com.

Shurlene was born on the Fourth of July, 1937, to Gwynn Moir and Preston Lee Norton, in Provo, UT, and died peacefully in Richland, WA on January 16, 2017. Shurlene graduated from Provo High School in 1955, where she was a member of the Pep... View Obituary & Service Information

The family of Shurlene Gwynn Norton Roundy created this Life Tributes page to make it easy to share your memories.

Send flowers to the Roundy family.