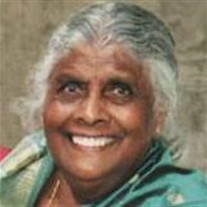 Sivanammal Putturengie Lingam (Amma), our sweet and delightful mother and grandmother, age 88, passed away March 16, 2015 in Provo, Utah, USA, surrounded by her loved ones. She was the only child born to Anuma and Basua Vengetan on June 27, 1926 in Dickoya, Sri Lanka. She married Linga Puttiah Lingam on March 8, 1943 at the age of 16. Her husband passed away in 1972 leaving her a widow for over 44 years. She lived in Sri Lanka until she immigrated to the United States on May 31, 1989. Amma was raised in the Hindu faith. Throughout her life she was very devoted to her faith and additionally developed a love of Christianity. She expressed this through her daily prayers and service to the less fortunate. On a weekly basis, it brought her great joy to invite homeless individuals to her home to feed and care for them (Feeding the hungry and nourishing the soul are traditional virtues encouraged by Hindu faith). Even in her last days, she continued to care for the wellbeing of others, and contribute generously to the welfare of those in need through local religious institutions. She was an excellent cook and loved making delicious Sri Lankan/Indian meals. Growing up she learned to sew and knit and made clothing and sweaters for her children. Amma is survived by her children: Susila (Athan) Rajalingam, Sri (Vadivu) Lingam, Ratna (Linda) Lingam, Rajendren Lingam, Selvan Lingam, Arunth Lingam, Suseendra (Murali) Moorthy and her daughter-in-law Alice Lingam; 13 grandchildren and 14 great-grandchildren. She was preceded in death by her husband, and her son, Rajan Lingam. Grandchildren: Nithakaran (Mangali), Rajikaran (Vinothini), Suha (Raj) Kumar, Kristen (Nathan) Sheranian, Ashley (Taylor) Parkinson, Jennifer Lingam, Shawn (Lyndi) Lingam, Brian (Melany) Lingam, Shivan Lingam, Abinaya Lingam, Ahran Lingam, Lakshan Moorthy, Sanjay Moorthy. Great-Grandchildren: Vihanga Nithakaran, Seaniya Nithakaran, Sasheen Nitharkan, Rinukshini Rajikaran, Kirthish Udai Rajikaran, Luxith Udai Rajikaran, Triana Kumar, Canon Sheranian, Abigail Sheranian, Lydia Sheranian, Kate Parkinson, Megan Parkinson, Elsie Parkinson, Madison Lingam. Funeral services will be held at 11:00 a.m., Thursday, March 19, 2015 the Berg Drawing Room Chapel, 185 East Center Street, Provo, Utah. Friends may call from 10-10:45 a.m. prior to services. Interment, East Lawn Memorial Hills, Provo, Utah.

Sivanammal Putturengie Lingam (Amma), our sweet and delightful mother and grandmother, age 88, passed away March 16, 2015 in Provo, Utah, USA, surrounded by her loved ones. She was the only child born to Anuma and Basua Vengetan on June 27,... View Obituary & Service Information

The family of Sivanammal Putturengie Lingam (Amma) created this Life Tributes page to make it easy to share your memories.