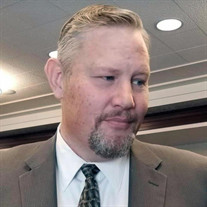 Spencer Aaron Bingham (44), of Spanish Fork, Utah, passed from this world on Wednesday, December 1, 2021. The last five weeks of Spencer’s life were spent in a hospital bed, fighting the effects of a difficult autoimmune disorder. This trial was his hardest; but his spirit was never broken. He spent his time testifying of his undying faith in Jesus Christ; and expressing gratitude to his doctors and nurses. He fought hard through endless hours of dialysis, blood draws, biopsies, increasing oxygen needs, and hospital beds that were inches too small. In the end, everything that could have been done; was done, by IHC hospital doctors and nurses. As a family, we are eternally grateful for the enduring care given our brother, and son. Spencer is much loved by his mother, father, all seven of his siblings, 25 nieces and nephews, and 9 grand nieces and nephews. He was a giant in both body a spirit; a modern-day Nephi, with the faith and determination to accomplish God’s will. Spencer graduated Utah Valley University with an associates degree in Communication. He could fix any computer, network, or Wi-Fi issue, and was lovingly referred to as the “nerdling child”. Spencer spent his entire life preparing for marriage and the gift of a large family; but passed before his dream could be realized. His gentle grace, and loving demeanor, stole the hearts of many a small child who called him uncle and friend. Spencer was preceded in death by his father (Lynn Bingham) and sister-in-law (Cheryl Cunningham Bingham). He is survived by his mother (Melody Bingham), his sisters (Amy and Betsy), brothers (Tim, Darrell, Brent, Peter, and Philip), sisters-in-law (Heather, Stephanie, Shanaé, Kira, and Samantha), and brother-in-law (Spencer). Graveside services will be held at 11:00 a.m., Saturday, December 4, 2021 at the Provo City Cemetery, 610 South State Street, Provo, Utah. Friends may visit with the family at the Berg Mortuary of Provo, 185 East Center Street, Friday, December 3, from 6-8:00 p.m. Family and friends to meet at the cemetery on Saturday. Condolences may be expressed to the family at www.bergmortuary.com. In lieu of flowers, please consider donating to a go fund me account to help with funeral costs and medical bills. https://gofund.me/ab0d4e22

Spencer Aaron Bingham (44), of Spanish Fork, Utah, passed from this world on Wednesday, December 1, 2021. The last five weeks of Spencer&#8217;s life were spent in a hospital bed, fighting the effects of a difficult autoimmune disorder. This... View Obituary & Service Information

The family of Spencer Aaron Bingham created this Life Tributes page to make it easy to share your memories.

Send flowers to the Bingham family.