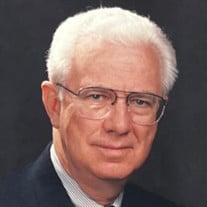 Stan A. Taylor died Saturday, January 15, 2022, at the age of 87, after a long battle with Parkinson’s Disease. Funeral services will be held at the Edgemont 5th Ward Chapel, 350 E 2950 N, Provo, UT 84604, at 11:00 AM on Friday, January 21. Viewing will be Thursday, January 20, at Berg Mortuary of Provo, 185 E Center St, from 6:00-8:00 PM, and Friday at the church before the funeral starting at 9:30 AM. Interment will be held in the Provo City Cemetery. Stan was born on April 11, 1934 in Provo to Melvin Taylor, an auto mechanic, and Arma Hancock Taylor, a nurse. He grew up in Provo and graduated from Provo High School. He served a mission for The Church of Jesus Christ of Latter-day Saints in the Chicago area and then returned to Provo, where he attended BYU and somehow persuaded Victoria Richards from Salt Lake to marry him. After graduating from BYU with a degree in Political Science, Stan entered the Ph.D. program at the prestigious Fletcher School of Law & Diplomacy, part of Harvard University and Tufts College in Boston, MA. While in Boston, Stan served as the bishop of the Billerica Ward though still in his mid-20s, and as the chair of the Political Science Department at Bentley College. In 1968, after receiving his doctorate from Fletcher, Stan took a position as a professor at BYU, teaching classes for nearly four decades in political science and international relations. Stan was chair of the BYU Political Science Department for six years and also founded the David M. Kennedy Center for International Studies, becoming its first director. He received every award BYU gives to faculty members and was beloved by his students. A scholarship fund was set up at BYU in Stan’s name to help students with their tuition and other expenses. Stan took two two-year leaves of absence from BYU to work in government in Washington, D.C. He was first a legislative assistant for Utah Congressman Gunn McKay and later a member of the US Senate Select Committee on Intelligence, appointed to that position by Utah Senator Jake Garn. Through these and other experiences, Stan became an expert in national security matters, teaching classes on the subject at BYU and in other schools around the US and the world, including in New Zealand, England and Wales. He published numerous books and articles on this subject and advised presidents and prime ministers. Stan continued to serve in The Church of Jesus Christ of Latter-day Saints in a number of capacities, including three stake presidencies (once as stake president) and as mission president in Boise, Idaho. He served as a special senior missionary advising members of The Church’s First Presidency and Quorum of the Twelve Apostles on international political matters. Stan was a proficient musician and excellent trumpet player. After his first mission for The Church, he formed The Stan Taylor Dance Band to help pay for his college expenses. Later, he was a trumpet player with the Utah Valley Symphony for many years. He was also known to play the Australian didgeridoo from time to time, mostly to the amusement of his family and friends. Stan is survived by his beloved wife Victoria Richards Taylor and four children, Paul Taylor (Mary Beecroft), Dave Taylor (Grace Gull), Julie Daines (David Daines), and John Taylor. His daughter, Lynnanne Wilson (Ross Wilson), predeceased him. He is also survived by 24 grandchildren and an increasing number of great-grandchildren. Condolences may be expressed to the family at www.bergmortuary.com.

The family of Stan A. Taylor created this Life Tributes page to make it easy to share your memories.