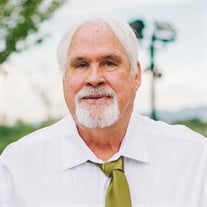 Stanley Martin Jacobson passed away unexpectedly of hypertensive heart disease on January 24, 2017. He was born on July 24, 1950 in Provo, UT to Sterling George Jacobson and Lorna Elizabeth Storrs Jacobson, and grew up in Utah County. Stan grew up the second youngest in a family of five rowdy boys. He enjoyed a rough and tumble childhood playing by the river with a lunch, and a Mason jar full of milk packed by his beloved mother. He and his friends were caught more than once “collecting” golf balls from a local golf course and then selling them on to other golfers. He graduated from Provo High School in 1968 and went on to college at Utah State University where he never let his schooling interfere with his education. Stan cultivated a love of fast cars and rock and roll. He owned an MG, a Chevy Camaro Z28, a Chevrolet Chevelle SS, a silver ’61 Corvette, and a ’77 beige Corvette, just to name a few. Stan loved to race, and during one particularly dangerous 6 week period in his twenties he was involved in 6 different car accidents; twice he ended up in the Provo River in two different Corvettes. He loved music from the ‘60s and ‘70s and could sing along with any song on a classic rock station. He loved Three Dog Night, The Rolling Stones, the Beatles, the Beach Boys, Pink Floyd, Simon & Garfunkel, Deep Purple, The Who, The Doors and the list goes on. He rode saddle broncs in the rodeo and was a crazy good western swing dancer. He loved to ski, golf, play guitar, and he dearly loved to fish. Stan started his career working in the family businesses. He worked with his brother Boyd at Quintek; Stan and his four brothers and their father owned Central Utah Block Co, called Cubco, and he owned Cubco Windows and BestBilt Windows in Provo. He was married to Debbie Cox in the early 1970’s for a few years, and they remained good friends. He married Gaye Lynn Purcell in 1986. They were sealed in the Manti Temple in November of 1988. Gaye Lynn brought along two great kids from her previous marriage, and Stan became a dad to two teenagers. He was generous, kind and fun and taught Jason and Merilee how to play poker and mix drinks. He paid for a mission and college and gave them jobs and helped with homework and took them on vacation and was a really great dad. Pretty soon, he and Gaye Lynn were blessed with three more amazing kids. When he was 40 they started welcoming Nicole, Katelyn and Zachary to the family. He loved coaching soccer and T-ball and teaching the kids about how the Raiders were the best football team and the Jazz were the best at basketball. He would take them out for Doughnut Saturdays, on fishing trips, camping trips and family vacations. He loved being active until his knees could no longer keep up, even though he still remained as active as possible. He had four knee replacement surgeries and was in the process of recovering from his last one at the time of his passing. Stan is survived by his wife, Gaye Lynn Jacobson; his kids, Jason Arave (Heidi); Merilee Rowley (Val); Nicole Scott (Geoff); Katelyn and Zachary; 6 grandkids and his four brothers, Russell (Kay), William, Boyd (Maxine) and Robert (Leesa). Funeral services will be held at 11:00 a.m., Monday, January 30, 2017 at the Mapleton Stake Center, 970 North 400 East, Mapleton, Utah. Friends may call at the Berg Mortuary of Provo, 185 East Center Street, Sunday, January 29, from 6-8:00 p.m. and at the church Monday, from 10-10:45 a.m. prior to services. Interment will immediately follow the service at Provo City Cemetery. Condolences may be expressed at www.bergmortuary.com.

Stanley Martin Jacobson passed away unexpectedly of hypertensive heart disease on January 24, 2017. He was born on July 24, 1950 in Provo, UT to Sterling George Jacobson and Lorna Elizabeth Storrs Jacobson, and grew up in Utah County. Stan... View Obituary & Service Information

The family of Stanley Martin Jacobson created this Life Tributes page to make it easy to share your memories.

Send flowers to the Jacobson family.