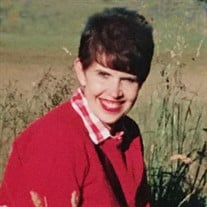 Stephanie was born March 18, 1942 in Cedar City, Utah, to Elois Lunt Wayment and Elvin Thomas Wayment. This was during WWII and Elois was living near her parents while Elvin served in the South Pacific for 4-1/2 years, from fall 1940 through spring 1945. Stephanie was three before she really got to know her father. After returning from the war, Stephanie's father settled his family in Inglewood, CA while he attended dental school at the University of Southern California. Upon graduation, the Wayment’s moved to Arcadia, CA where Stephanie grew up. Four other siblings joined the family: Susan, Mary, Richard and Anne. Stephanie was a student leader at her high school from which she graduated with high academic honors and was named Girl of the Year. She attended Brigham Young University and graduated with a degree in elementary education. As part of her university education, she spent a semester in Detroit, MI at the Merrill-Palmer Institute, where she met her future husband, Mark Beecroft (deceased). Stephanie and Mark were married in the Los Angeles LDS Temple in 1963 and eventually made their home in Springfield, VA. Four sons joined the family: Charles Mark (born July 16, 1964), Richard Jeffrey (born January 11, 1967), Irl Robert (born June 27, 1974) and James Michael (born December 11, 1975). A memorable adventure the boys remember was when Stephanie loaded up their VW van with 9-year-old Mark, 6-year-old Jeff and the baby, Robby, to drive across country by herself from Virginia to Southern California, where her parents were in Arcadia. Jeff remembers watching the road signs advertising upcoming attractions. They stopped to see the "world's largest ball of string," and paid a memorable visit to a farm where those city boys climbed a "huge" stack of hay. Stephanie, besides being the driver, was also the chef - she'd pull the van to the side of the road and make cheese sandwiches, slicing off the cheese from a 5 lb. brick of cheese. Jeff doesn't remember sleeping in a motel, so "we must have slept in the van." Besides the long drive with little boys, Stephanie was expecting #4 - Michael was born later that year. Amazing! Stephanie was a very caring person, always putting the needs of her family and others before her own. For example, a son remembers her faithfully getting up in the middle of the night to make sure a medication was administered. Another favorite memory is how she could always come up with great snacks, even if it was a new creation. Her Christmas caramels and homemade peanut butter "cups" were always a hit with both her family and friends. Grandma and Grandpa Wayment had a cabin in the mountains of Southern Utah at Navajo Lake. All four boys spent lots of time there. A trip to the cabin always included fishing and hiking, Grandma reading lots of stories, making homemade ice cream, sleeping in the loft, bathing in the big metal tub by the wood stove, outdoor "plumbing", i.e. Quichipaw, throwing rocks in the lake, helping to gather wood and watching Grandpa chopping wood. There was always plenty to do at the cabin; both work and play. In addition to Virginia, Stephanie also lived in Chino, CA, Mapleton, UT and, for the last several years, Provo, UT. Besides teaching her boys, she taught elementary school in different locations. She lived her life with an unwavering faith in God, which especially helped her as she endured several years of illness. Her family is grateful she is now at peace. She was preceded in death by her husband, Mark and son, Charles Mark. She is survived by sons, Richard Jeffrey (Sally), Irl Robert (Christina), and James Michael, seven grandchildren, as well as siblings Susan Hilbig (Wayne), Mary Wayment, Richard Wayment, and Anne Wayment Maselli. Graveside services will be held at 12:30 p.m., Monday, April 24, 2017 at Eastlawn Memorial Hills, 4800 North 650 East, Provo, Utah. Friends may call at the Berg Mortuary of Provo, 185 East Center Street from 11:00 a.m.-12:00 p.m. prior to services at the cemetery. Condolences may be expressed at www.bergmortuary.com.

Stephanie was born March 18, 1942 in Cedar City, Utah, to Elois Lunt Wayment and Elvin Thomas Wayment. This was during WWII and Elois was living near her parents while Elvin served in the South Pacific for 4-1/2 years, from fall 1940 through... View Obituary & Service Information

The family of Stephanie Wayment created this Life Tributes page to make it easy to share your memories.

Send flowers to the Wayment family.