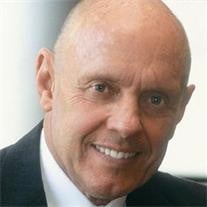 Our beloved husband, father, and grandfather, Stephen R. Covey, passed away peacefully at a hospital in Idaho Falls, Idaho, early on the morning of July 16, 2012, due to the residual effects of a bicycle accident he sustained this past April. He was in his 80th year. In his final hours, he was surrounded by his loving wife and each of his nine children and their spouses, which was a tender mercy of the Lord and something he always desired. Stephen was born and raised in Salt Lake City, Utah, to Stephen Glenn and Irene Louise Richards Covey. He attended East High School and graduated from the University of Utah with a degree in business. Following his graduation, Stephen served a mission to the British Isles. Upon his return, he earned an MBA from Harvard Business School and then began his teaching career at Brigham Young University where he later earned his doctorate degree. Stephen was a faithful member of The Church of Jesus Christ of Latter-day Saints and served in various capacities, including as a bishop, regional representative, temple sealer, and an advisor to the LDS Church Missionary Committee. At the age of 29, Stephen was called as the first mission president to Ireland, a calling he loved and which became a formative experience in his life. It was while serving as a missionary in England that he discovered his talent and passion for teaching. In 1983, he made the decision to leave his full time teaching position at BYU, which he had thoroughly enjoyed for over 25 years, to start an organization, Covey Leadership Center (which later became FranklinCovey), with the mission of taking Principle-Centered Leadership to the world. This mission influenced him to grow a global organization with operations in over 125 countries and to personally deliver thousands of speeches to individuals, leaders, CEO's, Generals, and Heads of State from all around the globe and to write dozens of books which have sold millions of copies in numerous languages. He thereby influenced literally tens of millions of people and thousands of organizations and communities everywhere. He was always surprised and embarrassed by his professional success and simply saw himself as a steward of the great work he was doing, always giving credit to God. Dad's greatest joy was his family. He'd prefer to spend time with his wife, kids, and grandkids than with anyone else. He loved family trips, special one-on-one dates, birthdays, farewells and homecomings, kids' sporting events, skiing at Sundance, and late night talks. He loved spending time in Montana on the lake where he taught us to water-ski, drive boats, ride bikes, fish, and shoot the bow and arrow and BB guns. He loved gathering his family and holding family councils and firesides where he would teach us important lessons such as how to make Christ the center of our lives or how to better serve Mom so that we "don't kill her off." Dad simply adored Mom, the former Sandra Merrill, and the love of his life, whom he met while he was a missionary and she was traveling abroad as the youngest member of the Mormon Tabernacle Choir. They later married on August 14, 1956, in the Salt Lake Temple, a marriage which led to nine children, 52 grandchildren, and six great-grandchildren. Dad loved the Savior and believed that if you put Him at the center of your life, everything else would fall into place. He was humble, compassionate, and generous to a fault. He had unbelievable optimism, was so affirming, and saw the good in everyone. He frequently played practical jokes on his friends, and let the kids build peanut butter and jelly sandwiches on his bald head more than once. He had a multitude of friends from all walks of life. He enjoyed riding his bike, watching inspiring movies, eating Chinese food and cherry-chocolate malts, attending BYU sporting events, and asking his wife to sing in public without any warning whatsoever. Throughout his life, on most mornings, he would arise early, go to a place where he could be alone, and he would pray, meditate, and study the scriptures. This daily private victory, as he coined it, became the source of his security, guidance, wisdom, and power and he often told us kids that "if you will spend twenty minutes each day with the Savior of the world in private worship, you will spend eternity in his presence." We are grateful for our knowledge of the Plan of Salvation and know that our patriarch has been taken home to a loving Heavenly Father and is now with his sweet mother and father, his sister Marilyn, and many other relatives and friends. We will sorely miss our "Papa" and long for the day when we will once again be united. Stephen is survived by his wife of nearly 56 years, Sandra Merrill; his nine children and their spouses: Cynthia (Kameron) Haller, Maria (David) Cole, Stephen M.R. (Jerolyn) Covey, Sean (Rebecca) Covey, David (Pamelyn) Covey, Catherine (Paul) Sagers, Colleen (Matthew) Brown, Jenny (Jason) Pitt, Joshua (Jenny) Covey; his siblings: Irene (Cal) Gaddis, Helen Jean Williams, and his best friend and brother John (Jane) Covey. Funeral services will be held at 1:00 p.m., Saturday, July 21, 2012 at the UCCU Events Center at Utah Valley University, 800 W. University Parkway, Orem, Utah (just off of the University Parkway freeway exit). Friends may call from 5:00-8:00 p.m., Friday, July 20 at the Oak Hills Stake Center, 925 East North Temple Drive, Provo, Utah (across from the Provo LDS Temple) and at the UCCU Events Center, Saturday, from 11:00 a.m.-12:30 p.m. prior to services. Condolences may be entered on his obituary at www.bergmortuary.com. If desired, donations may be made to the I Am A Leader Foundation, a charity supported by Stephen and dedicated to developing character and leadership skills in children and youth in public schools. Please visit any Zions Bank location for assistance or send your donation to: I Am A Leader Foundation, PO Box 1936, Provo, UT 84603, USA.

Our beloved husband, father, and grandfather, Stephen R. Covey, passed away peacefully at a hospital in Idaho Falls, Idaho, early on the morning of July 16, 2012, due to the residual effects of a bicycle accident he sustained this past April.... View Obituary & Service Information

The family of Stephen Covey, "Papa" created this Life Tributes page to make it easy to share your memories.