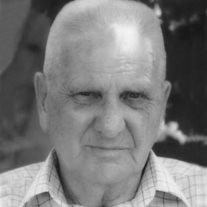 Stephen R. Eldredge, 81, passed away at home, Wednesday, January 29, 2014. He was born in Roosevelt, Utah on December 14, 1932, to George Raymond Eldredge and Melba Hanson. He married Marilyn Darlene Cahoon on May 17, 1954. Together, they raised five children. Our father was a man of few words - but one only had to stand in his presence to see how he spoke volumes on the things that mattered most in life. The legacy he left us was life lessons built upon example. Perseverance, hard work, kindness, selflessness, and loyalty are our fathers’ hallmark. We lived to see him add a little fun to his life. We enjoyed making him laugh and smile. And we especially loved hearing tales about him when he was young. He was a bit mischievous as a youth and that's all were going to say! He joined the Navy with three of his high school buddies, and they have remained friends throughout life. He loved airplanes, flying real ones and the models when he couldn’t; he loved his children, but adored his grandchildren. He was a man who lived simply; never saw the importance of things, but valued people and work. Our Father worked all of his 81 years. Retirement kept being a passing thought. He had a brilliant and creative mind, and it was as sharp as a tack. Stephen is survived by his daughters: Brenda, Sandy, UT; Barbara (Bryan) Livingston, Syracuse, UT; Pam (Kevin) Kemp, Elgin, IL; sons: Mark (Brenda), Lehi, UT; Keith, Provo, UT; brothers: Glen (Delores) Eldredge, Orem, UT; John (Joyce) Eldredge, Roosevelt, UT; sisters: Bette Wimmer, Moab, UT; Marie (Clyde) Bartlett, North Logan, UT; JoAnn Nelson, Roosevelt, UT; Nancy Mitchell, Roosevelt, UT. His adored grandchildren: Stephen Tanner Livingston, Wm. Conner Livingston, Christian Marcus Kemp, and Nicholas Patrick Kemp. He was going to be a Great Grandfather this May. He was preceded in death by his wife Marilyn, brother Clark, and his parents. Funeral services will be held Saturday, February 8, 2014 at 11 a.m., at Berg Mortuary Drawing Room Chapel, 185 East Center Street, Provo. Friends may call at the mortuary, Saturday morning, from 9:30-10:50 a.m. prior to services. Interment will follow at the Provo City Cemetery.

Stephen R. Eldredge, 81, passed away at home, Wednesday, January 29, 2014. He was born in Roosevelt, Utah on December 14, 1932, to George Raymond Eldredge and Melba Hanson. He married Marilyn Darlene Cahoon on May 17, 1954. Together, they raised... View Obituary & Service Information

The family of Stephen R. Eldredge created this Life Tributes page to make it easy to share your memories.

Send flowers to the Eldredge family.