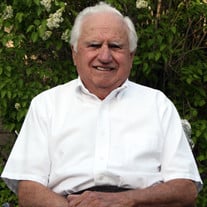 Our beloved husband, father, grandfather, brother and uncle, Steve Buffo, passed away on Saturday, January 23, 2016. Steve was born April 28, 1927 in Carbonville, Carbon County, Utah to Stefano Vittorio and Caterina Garda Buffo. He was the fourth child of his parents’ seven children. Steve served in the United States Navy during World War II and was honorably discharged. He returned to Utah and lived in Provo for many years. Steve was kind and devoted to his immediate and extended family as well as to his many friends. He enjoyed model railroading, music, the outdoors, jigsaw puzzles, photography, going for drives, and time together with his family. Steve never met a stranger and enjoyed interrelating with people. He is survived by his wife, Marna, and his children, Catherine (Stephen) Weber, Stephanie (John) Golding, and Joanne Church. He is also survived by five grandchildren, five great-grandchildren and a sister, Gloria Williams. He was preceded in death by his parents and siblings Mary Buffo, Frank Buffo, Rosa Carter, Nellie Nesbit, and Guido Buffo. Our family expresses our gratitude to the wonderful people at Central Utah Veterans Home for their excellent care, kindness, and friendship to Steve. Funeral services will be held on Wednesday, January 27, 2016 at 2:00 p.m. in the Berg Drawing Room Chapel, 185 East Center Street, Provo, Utah. Friends may call on the family at the mortuary on Wednesday from 1:00 until 2:00 p.m. Interment will be in the Provo City Cemetery. Condolences may be sent to Steve’s family through www.bergmortuary.com.

The family of Steve Buffo created this Life Tributes page to make it easy to share your memories.

Send flowers to the Buffo family.