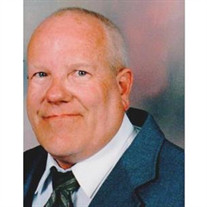 Steven Robert Carpenter of American Fork, Utah, passed away unexpectedly on September 12, 2019 in Salt Lake City, Utah, at the age of 75. Steven is survived by his wife, Joan Carpenter; his children, Shanna (Charlie), Scott (Ro), Lee, Terry (Tricia), Stacie (Kenton), Kevin (Megan), and Stefanie (Andy); also 17 grandchildren and 13 great-grandchildren. He is predeceased by his eldest son, Gary, his brother, Leslie Carpenter, and his sister, Carrie Lee Abbott. Steven was born in Sandy, Utah on December 14, 1943 to Harold and Lerona Carpenter. Throughout Steven’s life he worked several professions, but the majority of his life he spent working as a machinist for various companies, until his retirement. He married Darlene Carpenter, and they later divorced. He then married the love of his life, Joan Carpenter in 1990. Steve was a devoted father, an avid photographer, lover of the outdoors, bird watcher, traveler, coin and stamp collector, and loved spending time with family. Steve enjoyed learning how to build computers and became the person that everyone in the family came to for computer help. He was a spiritual man who enjoyed many opportunities to serve in The Church of Jesus of Latter-day Saints in different callings. He will be deeply missed by his friends, family, and all who knew him. Funeral services will be held at 12 p.m., Tuesday, September 17, 2019 at the American Fork 30th Ward Chapel, 270 North 900 East, American Fork, Utah. A viewing will be held from 10:30-11:45 a.m. prior to services. Interment, Eastlawn Memorial Hills. Condolences may be expressed at www.bergmortuary.com. In lieu of flowers, please send donations for Joan’s future care to www.venmo.com/Joan-Carpenter-2.

The family of Steven Robert Carpenter created this Life Tributes page to make it easy to share your memories.

Send flowers to the Carpenter family.